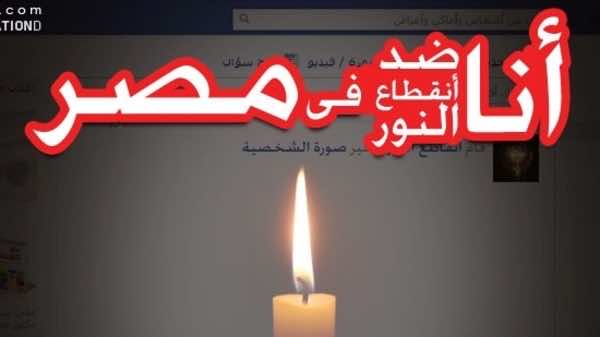 Egyptians across the country are becoming increasingly frustrated with repeated electricity cuts in recent weeks, prompting campaigns urging consumers not to pay their bills until service is fully restored.

A Facebook campaign called “No service, No payment” urges users not to pay electricity bills.

The page posted pictures of residents putting notes on their doors that read: “Dear electricity bill collector, kindly respect yourself and do not knock on this door. Take the expense of electricity – which we are not using – from those who are cutting it. Forewarned is forearmed.”

Group administrator, Hassan Nassar, told Al Arabiya English on Saturday that this is “a peaceful tool” to protest against the electricity ministry.

“We are not receiving the service, why should we pay for it?” he said, adding that power outages occur for 3-5 hours on a daily basis in several Cairo districts.

Nassar said that people living in el-Marg, a district in the north-east of Cairo, positively responded to the initiative.

In Egypt’s large industrial and agricultural city, el-Mahalla el-Kubra, a number of worshippers during Friday prayers used speakers to urge citizens not to pay electricity bills, a local newspaper said.

Leaflets distributed out to worshippers called on the city’s residents not to pay in protest against the continuous blackouts, the Youm7 newspaper reported.

Throughout the past days, Egyptian youth flooded Facebook and Twitter with their frustrations over the power cuts.

“The worst job you can have now in Egypt is to be an electricity bill collector,” wrote Twitter user @HanyAEllatif2h.

This week, a comical poster created by social media users urged the ministry of electricity to avoid a blackout on Friday night to ensure they are able to watch a weekly show hosted by Egypt’s popular satirist Bassem Yousef, as well as pan-Arab talent show Arab Idol.

But for many students trying to prepare for their exams, the issue was more serious.

“Every time I decide to study electricity blacks out; I don’t know if it’s my luck or somebody else’s stupidity,” said Twitter user @ahmedwida2h.

Port Said resident Shahinda Gharib, who is continuing a master degree in Family and Child Studies, told Al Arabiya English the blackouts are a major obstacle for students.

“Students lose concentration. With this hot weather and lack of light, I’m no longer motivated to study,” she said.

The latest wave of electricity blackouts in Egypt has sparked public anger against President Mohammed Mursi’s government, which seems to be struggling with what turned to be a seasonal drawback in electricity supply.

“Is it possible for our genius government to tell us how many tons of meat got spoiled as a result of power outage?!! How many tons of medicine, especially insulin?? #Egypt #Mursi” said Twitter user Mostafa Dawood.

The electricity ministry apologized in an official statement last week for the nationwide power cuts, saying “fuel shortages have made it difficult for allocated generators to keep up with mounting consumption,” according to al-Ahram Online.

Activist to be tried for insulting Egyptian president