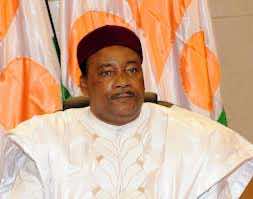 The attackers who staged deadly twin bombings at an army base and French-run uranium mine in northern Niger came from neighbouring Libya, Niger’s President Mahamadou Issoufou said Saturday.

“The attackers, according to all the information we have received, came from Libya, from the south of Libya,” Issoufou told television channel France 24.

“Libya continues to be a source of destabilisation for the countries of the Sahel,” the semi-arid band of territory that crosses Africa south of the Sahara desert, Issoufou said.

His comments came after a meeting with Luc Oursel, the chief executive of French nuclear giant Areva, the majority owner of the Somair mine targeted in Thursday’s blasts.

The dawn attacks began with twin suicide bombings at the army base in Agadez, the main city in northern Niger, and the Somair mine some 250 kilometres (150 miles) to the north.

Attackers then seized a building at the Agadez base, ending in a raid by French special forces and local troops.

In all, the Agadez attack claimed 24 victims in addition to eight Islamists killed, according to Niger’s Defence Minister Mahamadou Karidjo.

One employee was killed and 14 wounded in the Somair attack.

Issoufou said the conflict that led to the overthrow and killing of Libyan dictator Moamer Kadhafi was destabilising the region.

“I had already warned from the beginning of the Libyan crisis… that it was necessary to avoid solutions after Kadhafi’s defeat that would be even worse, and I had said that if the Libyan state turned into a Somalia or fell into the hands of fundamentalists, the solution would be worse,” he said.

“The fact is, Libya continues to be a source of destabilisation for the countries of the Sahel.”

The attacks were claimed by two Islamist groups, the Movement for Oneness and Jihad in West Africa (MUJAO) and veteran jihadist leader Mokhtar Belmokhtar’s Signatories in Blood group.

Both said the bombings were in retaliation for Niger’s participation in a French-led military campaign against Al-Qaeda-linked groups in neighbouring Mali.