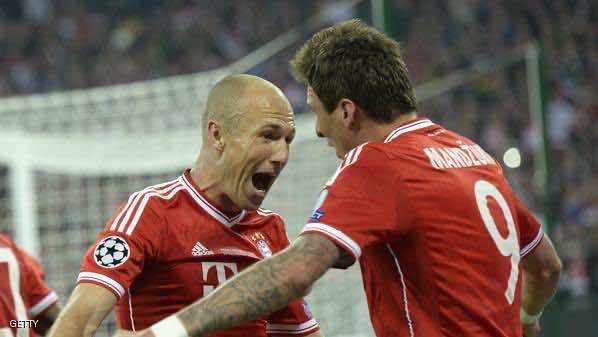 Bayern Munich won on Saturday night at Wembley stadium in London the final of the Champions’ League after it defeated Borussia Dortmund by 2-1.

The winning goal was scored by the Dutch player Ruben at the 88th minute of the game after he received a magical pass from his teammate, Franck Ribery.

Today’s title will add to the fourth Champions’ League titles that the German team had already won in the past. Bayern Munich won its first Champions’ title, and the first title ever for a German team, in 1974 when it defeated Spain’s Athletico of Madird. Bayern’s second, third and fourth titles were achieved in 1975, 1972 and 2001 respectively.

This title comes as a crowning achievement for Bayern’s coach, Jupp Keypunches.A World Cup and European champion as a player in the 1970s, the 68-year old, who will be replaced by Pepe Guardiola, won his second Champions’ League title after the one he won with Real Madrid in 1998.