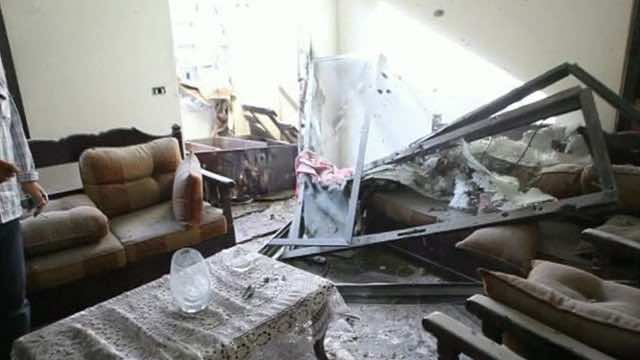 At least five people have been wounded in southern Lebanon on Sunday when two Grad rockets exploded in the Shiite-majority Hezbollah district, a Lebanese security source said.

The attack may have been a response to a speech by the militant group’s leader Hassan Nasrallah a day earlier, according to Reuters, in which he committed to fighting in Syria’s conflict on behalf of his ally President Bashar al-Assad.

“Two Grad rockets hit the southern suburbs of Beirut. One rocket struck a car showroom where four people were wounded and vehicles were damaged,” the source told AFP.

Both rockets hit the Al-Shayyah area of Beirut.

The security source said four of those wounded in the showroom were all Syrian workers. An AFP journalist said the second rocket hit an apartment block and caused widespread damage but no casualties.

“This incident is probably related to the conflict in Syria,” the security source said.

One rocket landed in the Mar Mikhael district on the southern edge of the capital, striking a car exhibit near a church on the street and causing all four casualties, a Lebanese army statement said. Another struck the second floor of an apartment in a building in Chiyah district south of Beirut, about two kilometers (one mile) away from Mar Mikhael. The apartment’s balcony appeared peppered with shrapnel, but no one was wounded.

The state-run National News Agency said among the wounded in the Mar Mikhael blast were three Syrians.

A security official told The Associated Press that rocket launchers were found in woods in a predominantly Christian and Druse area in suburbs southeast of Beirut. The official spoke on condition of anonymity in line with regulations.

Assad is fighting to end a two-year revolt against his rule, and has gained support from Hezbollah with fighters from the Shiite group fighting alongside regime forces in Syria over the past week.

Nasrallah on Saturday vowed “victory” in the fight against Syrian opposition fighters, saying his group is committed to its choice in the conflict and will accept all sacrifices and consequences of it.

“I say to all the honorable people, to the mujahedeen, to the heroes: I have always promised you a victory and now I pledge to you a new one” in Syria, he said at a ceremony marking the 13th anniversary of Israel’s military withdrawal from Lebanon.

Nasrallah said Hezbollah members are fighting in Syria against Islamic extremists who pose a danger to Lebanon.

His comments on Saturday marked the first time he has publicly confirmed his men were fighting in Syria.

They are also his first since Hezbollah fighters have become deeply involved in the battle for of the central Syrian town of Qusayr.

He said tens of thousands of Islamic extremists from all over the world have been sent to Syria to fight the regime, but Hezbollah sends “a few” fighters and it is accused of intervening in the conflict.