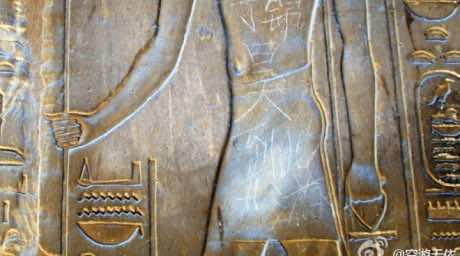 A Chinese tourist who defaced an ancient Egyptian monument was hunted down by Internet users who prompted his parents to apologise, state media reported on Monday.

According to reports, the vandalism took place in a temple dedicated to Amenhotep III in Luxor, on the banks of the Nile River.

Internet users hunted down the perpetrator, a 15-year-old boy named Ding Jinhao, and hacked the website of his school, forcing users to click on a sign parodying Ding’s graffiti before entering.

The online furore prompted his parents, who said Ding had “cried all night” after learning of the cyberattacks, to issue an apology in a local newspaper.

The incident highlights fears over perceptions of the growing number of Chinese heading abroad for their holidays.

“This incident is not just about the problem of one person but has everything to do with national quality,” one Weibo user wrote.

“People must die if they lose face for the nation,” another said.  Asked about the incident, Beijing’s foreign ministry spokesman Hong Lei said: “There are more and more Chinese tourists to foreign countries in recent years.

“We hope that through tourism, we may improve our friendship with foreign countries, and we also hope that Chinese tourists will abide by local laws and regulations and behave themselves.”

Earlier this month a top official said the dire manners and “uncivilised behaviour” of some Chinese tourists overseas were harming the country’s image, as he lamented their poor “quality and breeding”, according to state-run media.

China has seen rapid growth in outbound trips in recent years, and Chinese travellers are now the biggest source of international tourism cash in the world, according to a the United Nations World Tourism Organization.

Renaud de Spens, a Beijing-based independent expert on both the Chinese Internet and Egyptology, told AFP that commenting on the case gave ordinary posters the opportunity to “denounce the behaviour of their elites”.

“Chinese media feel compelled (to) draw a moral from this… It amounts to propaganda, with the message: ‘Be careful, citizens. When you are abroad you represent China. Be loyal, wherever you are,'” he said.