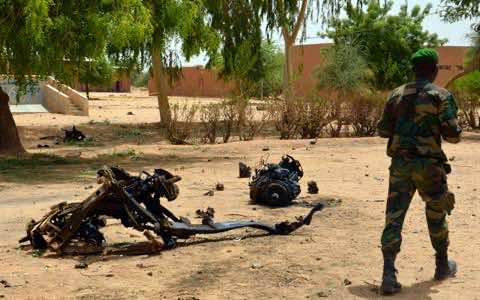 Niger’s president said Monday that attackers who bombed an army base and French-run uranium mine, leaving 38 people dead, entered his country from southern Libya, where he warned further attacks were being planned on Chad.

“For Niger in particular, the main threat has moved from the Malian border to the Libyan border. I confirm in effect that the enemy who attacked us… comes from the (Libyan) south, where another attack is being prepared against Chad,” said President Mahamadou Issoufou.

Two Islamist groups claimed Thursday’s attacks in northern Niger, calling them retaliation for the country sending troops to help a French-led campaign against Al-Qaeda-linked insurgents in Mali, in which Chad is also involved.

Issoufou, speaking to a Chadian delegation, did not say whether the planned “attack” on Chad had been foiled.

“The situation in Mali, which is a consequence of the crisis in Libya, should not sidetrack the international community’s duty to stabilise the situation in Libya, (which) today constitutes the main source of destabilisation in the Sahel region,” he said.

Last week’s dawn attacks began with twin suicide bombings at the army base in Agadez, the main city in northern Niger, and the Somair mine some 250 kilometres (150 miles) to the north, which is majority owned by French nuclear giant Areva.

Attackers then seized a building at the Agadez base, ending in a raid by French special forces and local troops.

The attacks were claimed by two Islamist groups, the Movement for Oneness and Jihad in West Africa (MUJAO) and veteran jihadist leader Mokhtar Belmokhtar’s Signatories in Blood group.