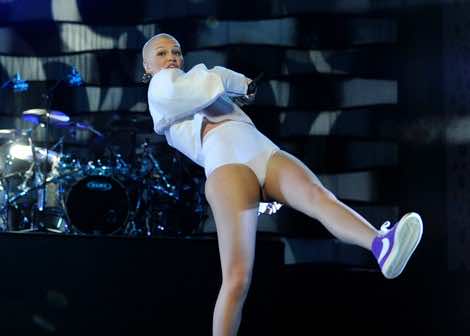 For several years now, a large number of Moroccans are slamming the Mawazine Festival on the grounds that it should not be Morocco’s priority for the time being. Irrespective of their principles and leanings, these Moroccans agree on disagreeing with celebrating this festival, particularly in the presence of the current economic crisis.

Yet, no sooner does the opening of the festival begin than thousands of Moroccans hurriedly head towards it in a state of excitement, enjoyment and utter ecstasy. At this point, some of the festival attendees themselves once added their voice to those criticizing the event and the fortune spent on it, but their attendance can only be a sign of schizophrenic uncertainty.

With the number of Moroccans sharing pictures and caricatures mocking the Mawazine festival among themselves, you’d think that the event would be attended only by very few Moroccans. Yet on the opening ceremony of the festival, 150,000 people flocked to attend Rihanna’s show.

At a time when some Moroccans are left in hospitals to suffer in heart wrenching situations and when many families barely make ends meet, others are enjoying life at the festival and clapping hands in felicity and apathy.

Prior to the event, nearly all Moroccans speak negatively of the event, depending on their own reasons. Once the event kicks off they applaud the affluent singers. After the event, they regret their attendance, saying that they were seduced into it.

No one claim that those who are sharing these videos and pictures are the same people who criticized the lavish way in which foreign artists are paid with hard currency, but what is sure is that Moroccans have mixed feeling towards this festival.’
“The Mawazine Festival does not represent Moroccans; we always hope it will not take place at all, but the organizers don’t care about the majority of the people” a graduate student from Rabat, who asked to speak on the condition of anonymity told MWN.

“Shame on our government that allows such festivals to take place in a country where poverty and illiteracy are still common,” another one said.

“Instead of spending money on this event, they could have helped many poor Moroccan people,” Safaa el Ouidali, a student from Agadir, said

At first glance, these statements may lead us to wonder about who the attendees are. They are certainly Moroccans. But do they represent all the Moroccan masses who suffer from unemployment and deprivation? If Mawazine does not represent Moroccans, why are so many of them attending it?

“This is the problem of Moroccans; before the start of Mawazine, they ask for change and criticize squandering money on such trivialities. Yet, they cannot help being part of these trivialities,” a Moroccan teacher told MWN.

It is high time Moroccans reconsidered the change they are seeking. The question is: Are they making the Mawazine Festival a success or succeeding in deteriorating their own standards of living?
The heart of the matter is that if they took to the street in thousands in the same number of the festival attendees, they would at least demand their rights and help in bringing about the change they are seeking.

Moroccans want to see the change. But few of them are ready to be the change they want to see in their country. So far, the change many of them want to see is the organization of the Mawazine Festival. And it is the only change actually taking place.