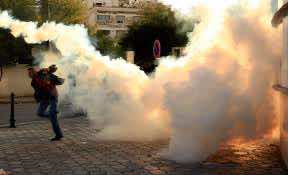 Clashes broke out on Tuesday between Tunisian street vendors and police who fired tear gas to disperse them in the northern town of Bizerte, interior ministry spokesman Mohamed Ali Aroui said.

Furious at the regional governor’s decision to ban their mobile stalls in the town centre, the street vendors attacked the police, hurling rocks and petrol bombs, and the police fired tear gas in response, Aroui told AFP.

He said the ministry was investigating reports that a 73-year-old man had died from suffocation after inhaling the gas.

“We have been informed that an old man died this morning in a taxi in Bizerte and an enquiry has been opened to determine the cause of his death,” the spokesman said, while refusing to confirm that it was linked to the clashes.

A witness told AFP that the police had intervened in the middle of the night when dozens of street vendors set up their stalls without permission.

He said normal shops remained shut in the centre of Bizerte on Tuesday due to fears of renewed unrest.

The mass uprising that toppled former dictator Zine El Abidine Ben Ali in January 2011 and touched off the Arab Spring began when a street vendor in the central town of Sidi Bouzid set fire to himself in protest at police harassment.

Tunisia’s informal sector, which was relatively limited under Ben Ali, has since grown significantly and police have largely tolerated the proliferation of street vendors, given the role of poverty and high unemployment in driving the revolution.

More than two years on, nearly a quarter of Tunisia’s population lives in poverty, according to official statistics, while around 17 percent of the active population are unemployed.