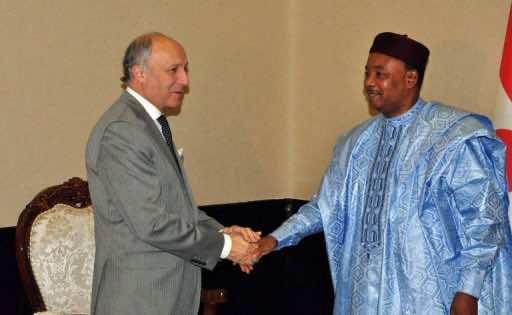 France’s foreign minister on Tuesday urged Libya and its neighbours to work together to tackle threats from “terrorist groups”, as he visited Niger a week after the country was hit by deadly attacks blamed on Islamists from southern Libya.

“It seems we must make a special effort on southern Libya, which is also what Libya wants,” Laurent Fabius said after meeting Niger President Mahamadou Issoufou in Niamey.

France’s top diplomat said they had discussed “measures that could be taken by neighbouring countries” in liaison with Libya to deal with possible actions by “terrorist groups”.

“This is also what the Libyan prime minister wants,” Fabius added. “We will see how we can encourage joint action with the Libyans.”

Northern Niger was struck by near-simultaneous suicide attacks on May 23 that killed 24 people at an army base and one person at a French-run uranium mine.

Two Islamist groups have claimed responsibility for the bombings, calling them retaliation for the country sending troops to help a French-led campaign against Al-Qaeda-linked insurgents in Mali.

Niger’s president has said that the attackers entered the country from southern Libya, but Libyan Prime Minister Ali Zeidan has denied the claim.

According to several observers, southern Libya has in recent months increasingly become a safe haven for jihadists forced from Mali by the French-led offensive that began in January.

After visiting Niamey, Fabius travelled to the Malian capital where he met President Dioncounda Traore and reiterated France’s stance that all of Mali must be able to take part in the July 28 presidential elections — including a northern region occupied by Tuareg separatists.

“For France, it’s clear that there can’t be two countries within the same country. Arrangements will be made so that the voting in Kidal proceeds as elsewhere,” Fabius told AFP upon arrival in Bamako.

France’s position has drawn criticism from the party of leading Malian politician and presidential hopeful Soumana Sacko, which has accused Paris of meddling in the country’s internal politics.