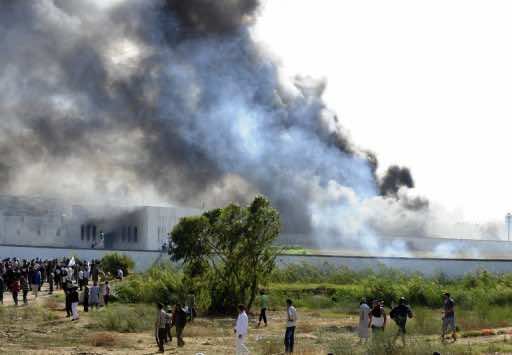 Twenty people received a two-year suspended prison sentence on Tuesday for their part in a deadly attack on the US embassy in Tunisia last year, their lawyer said.

“They all got a two-year suspended sentence,” said lawyer Anouar Ouled Ali.

The verdict, which was not made public, came after only half a day, an unusually short trial in the north African country.

Hundreds of angry Islamist protesters attacked the US mission in Tunis on September 14 after an American-made film mocking their religion was published on the Internet.

Four of the assailants were killed and dozens wounded in the violence, which saw protesters storm the embassy and torch a neighbouring American school.

Questioned individually by the judge, the accused denied having taken part in the protest or attacking the embassy and the police.

Tunisian judicial rulings are not usually announced in court.

Defence lawyers strongly criticised the trial and the main charges, including premeditated attacks organised by an armed gang, with sentences ranging from five years in jail to possible death penalties.

No executions have been carried out in Tunisia since 1991 and death sentences are rarely pronounced.

“These protests were part of a spontaneous reaction throughout the (Muslim) world against attacks on our sacred symbols,” said one of the defence lawyers, Slah Barakati.

He demanded that charges be dropped, saying that the trial was a result of the Tunisian judiciary bowing to pressure from the West.

“These Tunisians are in court to please the United States and the European Union,” Barakati told the judge.

Another lawyer criticised the “confessions extracted by the police under pressure and threats”.

Abu Iyadh has been on the run from the police since September, but none of the movement’s leaders have been tried for the embassy attack.

Tunisia has been rocked by waves of violence blamed on radical Islamists since the 2011 revolution that overthrew the regime of strongman Zine El Abidine Ben Ali, culminating in the embassy attack.

The coalition government, led by Islamist party Ennahda, was sharply criticised last year for failing to rein in the extremists and prevent the violence.

But in recent months it has taken a much tougher stand, especially since the discovery in April of jihadist groups on the border with Algeria with links to Al-Qaeda.

Earlier this month one person was killed and about 20 wounded in clashes between police and Ansar al-Sharia supporters.