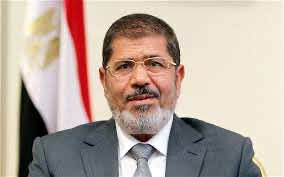 Human rights groups said the earlier drafts  would have given the security services control over NGOs.

“The state does not control,” Morsi said in a televised speech. “It does not aspire to control civil society, nor should it.”

The Senate, which acts as interim parliament, will discuss the draft law and can propose amendments.

Under Mubarak, many rights groups failed to get operating licences and their activities were monitored by the then all-powerful security services.

The interim military government which took power on his ouster ordered raids on offices of foreign NGOs in which Americans were among the staff referred to trial on charges of receiving illicit foreign funds.

The raids dealt a serious blow to relations between the military and Washington, its main foreign aid donor.

The president’s office says the new law is aimed at regulating NGO activities and funding within the confines of Egyptian law, but critics say it allows a government appointed steering committee control over their funding.

“The crucial test of whether the law allows NGOs to operate independently is whether these NGOS are able to get funding to survive and whether they’re allowed to operate without interference,” said Human Rights Watch Egypt director, Heba Morayef.

“The law fails on both counts,” she said.

The text published on Wednesday allows a steering committee headed by the social affairs minister to object to foreign funding and domestic fundraising requests.

But the committee must obtain a court ruling to back its objections.

“It also created a clear reference point with regards to denying registration or objecting to activities, ie the constitution and legal framework of Egypt,” she added.