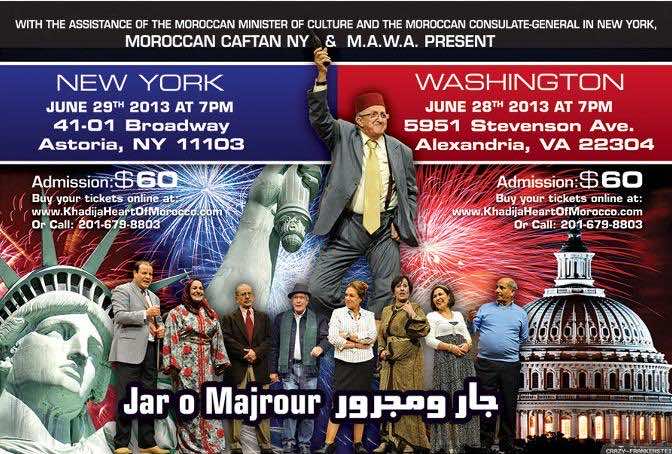 The National Theater Mohammed V will perform in the United States for the first time in Washington D.C. on June 28 and in New York City on June 29. The event is organized by Moroccan designer Khadija Mouh.

“In Morocco, the reputation of the theater has risen. I have worked for many years to bring them abroad and inchallah, now, it will happen,” said Mouh.

The chance to showcase the theater in the United States took Mouh three years to accomplish, but it was only recently tat she saw a positive response from the Moroccan community as well at the Moroccan consulate in New York City. With help from Consul General Mr. Mohammed Benabdeljalil and Moroccan Minister of Culture Mohamed Amine Sbihi, she was able to invite the eleven actors and their director.

According to the 2010 Census, there are over 82,000 Moroccans living in the United States with significant populations found in New York, Washington D.C., Boston, and Florida. 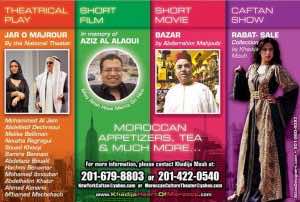 “I found people to be interested because this is the first time. But, it’s a big group. New York and Washington, in those two cities I feel the immigrants are more interested in the arts and they are close to me,” the New Jersey resident said.  “My friends and my people are here and, Al-Hamduillah (thank God), I have very good friends. They are helping me and I have support.”

Named after the deceased Moroccan King Mohammed V, the national theater was established after Morocco gained independence in 1956 and has become a vibrant part of Moroccan culture.

According to the event organizers, this performance will boost the morale of Moroccans adapting to life in the United States.

“Two years, three years, some of them I know have been for fifteen years in America and they never went back,” she said. “These people also need to feel their country and see their country and I now there is the media and they see it on TV, but it is not the same when you sit and the actor or actress is in front of you. They care about that.”

Mouh immigrated to the United States in the 1980s from Sale near the capital Rabat. She settled in New York City near the luminous signs of musicals and plays on Broadway.

The designer explained, “My uncle took me to see my first movie in the cinema without my father knowing. It’s something that was cultural. Women had to be protected.”

She eventually attended a performance with her young nephew and managed to find her way to the front of a packed house. From there, she said, she could not stop laughing.

“I was laughing even when people were finished,” said Mouh. “At that time, I started putting on fashion shows to display my line of Moroccan caftans. I told myself I had to bring them to the United States for a show.”

Besides the performance by the theater of Mohammed V in both the Moroccan dialect (Darija) and Arabic, there will be a short film in memory of comedian Aziz El Alaoui who died of a heart attack in March. Another short film called Bazaar by actor, writer, and director Abderrahim Mahjoubi will play during the night followed by a fashion show of Khadija Mouh’s latest designs.