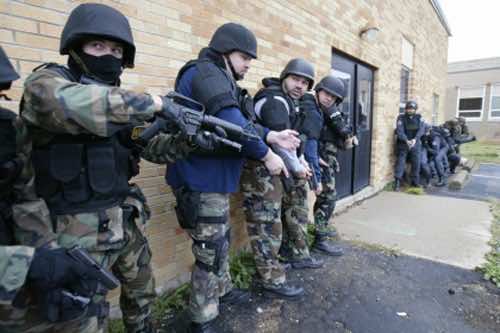 An Egyptian asylum-seeker wanted by Interpol was able to evade the attention of Australian authorities due to a reduction of security screening amid a record boat influx, officials said Thursday.

The man, a member of the extremist group Egyptian Islamic Jihad, lived in rural Australia in a minimum-security immigration facility for almost a year before he was moved to Sydney’s secure Villawood detention centre.

His case sparked controversy when it came to light earlier this week. David Irvine, head of the Australian Security Intelligence Organisation,  was grilled on the matter in parliament Thursday.

Irvine said the man was cleared for community detention after a brief security assessment under a new  system launched in response to the record influx of asylum-seekers — likely to top 25,000 in the year to June 30.

“We thought either he was someone else or he wasn’t registered in what I’ll call our holdings,” Irvine told the Senate.

“We also subsequently checked his name on an alert (wanted) list and were told by the country that put him on the alert list it wasn’t the same person.”

Instead of blanket checks Irvine said just 10-15 percent of boat arrivals who were deemed likely to be refugees were now subject to full security review, a situation which opposition lawmakers labelled shocking.

“What has been revealed today is a national security scandal,” said opposition immigration spokesman Scott Morrison.

Deputy police chief Peter Drennan said the man was convicted by an Egyptian military tribunal in 1999 of membership of a terrorist group, premeditated murder, destruction of property and weapons and explosives charges.

Egypt later confirmed that he was, in fact, the man on Interpol’s wanted list, but it took five months from that confirmation for him to be moved from the rural facility to a maximum-security centre, Drennan added.

The opposition, on track to win the September 14 national elections according to opinion polls, has condemned the situation, saying a convicted extremist had essentially been “a (swimming) pool fence away from freedom”.

Though they arrive in moderate numbers by global standards asylum-seekers are a sensitive political issue in Australia and likely to be a  prominent issue in this year’s electoral race. Debate is already intensifying over border security.

The conservatives — widely tipped to beat Prime Minister Julia Gillard’s unpopular Labor government — have pledged to crack down on boatpeople with tough policies including tow-backs of boats to international waters.