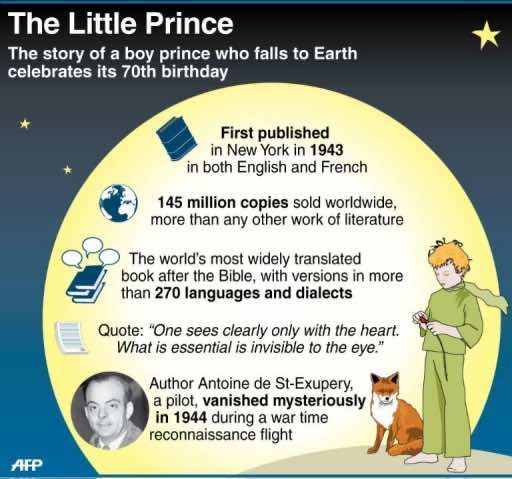 Battling the wind in his World War I biplane, a French pilot landed on a sandy Moroccan airstrip. Nearly 90 years on, a museum honours his stay and the world-renowned book it inspired.

“Antoine de Saint-Exupery the writer was partly born here, in Tarfaya, where he spent two years as station manager of Aeropostale,” says Sadat Shaibat Mrabihrabou, opening the doors to the small museum in Morocco’s far south, where the sea and the desert meet.

“It’s here that he began writing his books, under the stars,” he says.

“We’re at the birthplace of a writer known worldwide.”

Saint-Exupery is a name inseparable from his book “The Little Prince”, a series of self-illustrated parables in which a boy prince from a tiny asteroid recounts his adventures among the stars to a pilot who has crash landed in the desert.

First published almost exactly 70 years ago in New York, in English and French, it became one of the best-selling books of all time with more than 140 million copies sold, and has been translated into 270 languages and dialects.

Prior to his stellar literary achievements, Saint-Exupery was a pioneer aviator posted to Tarfaya in 1927, a wind-swept outpost that served as an important refuelling station for the Aeropostale aviation company linking France to its colonies in Africa.

Today, even with new building projects rising from the sands, this sleepy port town formerly known as Cape Juby gives the impression that it’s hardly changed.

In front of Tarfaya stands a derelict fortress built by the British in the late 19th century, and the Atlantic Ocean stretching to the horizon. Behind it lies the Sahara desert.

The former airstrip is five kilometres (three miles) out of town.

Between the two world wars, planes would leave from Toulouse in France and deliver their cargoes progressively further south, in hazardous conditions.

But the biplanes they used could only travel up to 700 kilometres, so the airborne mail company decided to establish a new staging post south of Agadir, at Cape Juby, then under Spanish control.

Saint-Exupery packed his bags and flew his World War I-era Breguet 14 biplane to the Moroccan coast to take up his new job, whose duties included negotiating for the release of downed pilots captured by hostile local tribes.

During his 18-month posting in the dramatic isolation of Tarfaya, he wrote his first novel “Southern Mail”, “whose title was suggested by another pioneering French airman, Jean Mermoz,” according to the museum’s curator.

There too was suggested the desert landscape that the Little Prince discovers when he falls to Earth, although that book was written more than a decade later.

In 2004, the Tarfaya museum opened, dedicated to preserving this key episode in the life of one of France’s best-loved writers, whose Little Prince also has a museum in Japan.

“It was at this man’s home that I heard for the first time the name of Saint-Exupery, when I was five to six years old,” he adds.

The life of the celebrated aviator-author is told on the walls of the museum, from his birth in Lyon in 1900 to his mysterious death in 1944 during a reconnaissance mission in the Mediterranean, after having survived a Sahara desert crash in 1935.

“I really loved the Sahara. I spent nights in total seclusion. I woke up in this yellow expanse blown by gusts of wind as if at sea,” reads one of the panels.

In the corner hangs an original picture of the Little Prince scribbled by its author.