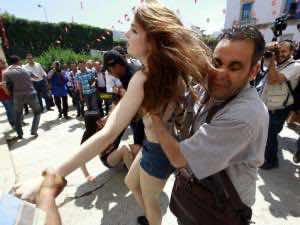 Three European women with radical activist group Femen, who were arrested after baring their breasts in Tunis, will be tried next week for public indecency, which carries a possible prison sentence, their lawyer said on Friday.

“They will appear in court in Tunis on June 5… The trial will be an open hearing,” Souheib Bahri told AFP, information confirmed by French consular officials in Tunis.

They will be tried for “public indecency” and an “attack on public morals,” crimes both punishable by six months in jail in Tunisia.

The three young women, two French and one German, were arrested on Wednesday as they held a topless protest outside the central courthouse in Tunis, the first such protest organised by Femen in the Arab world.

They were demonstrating to demand the release of Amina Sboui, a Tunisian activist with their group who was detained earlier this month after protesting against Tunisia’s main Salafist group and painting the word “Femen” on a wall near a cemetery in the city of Kairouan.