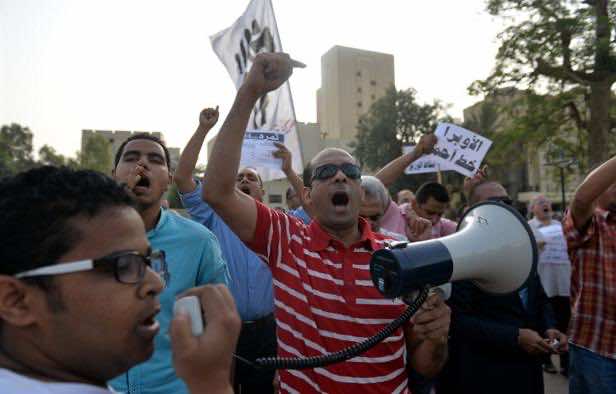 The sacking of Egypt’s Opera House head has triggered a new political battle against President Mohamed Morsi, this time by artists who accuse the Islamist’s Muslim Brotherhood of aiming to control cultural institutions.

The artists have taken to strikes, demonstrations and cancelling shows to counter what they say are Islamist designs on key cultural institutions.

They suspended performances in the flagship cultural center on Tuesday, after its director Inas Abdel Dayem was sacked.

On Thursday, protesters chanting “Down with the rule of the Muslim Brotherhood!” rallied outside the Opera House, demanding the resignation of Culture Minister Alaa Abdel Aziz.

Aziz, appointed in a recent cabinet reshuffle, is considered close to the Brotherhood, although he is not a member.

The conflict with the artists comes in addition to battles with the nation’s judiciary, media and police with Morsi’s opponents accusing his once-banned Islamist group of trying to monopolise public and private institutions.

The latest confrontation with Morsi takes place in an atmosphere of growing economic insecurity, and few weeks before the first anniversary of his election.

Morsi’s opponents’ fears were reinforced after the dismissals of Salah al-Meligui, the head of the department of fine arts at the culture ministry, and Ahmed Mohaged, head of the General Egyptian Book Organization.

On Wednesday, the secretary general of the Supreme Council for Culture, Said Tewfik, announced he too had resigned to protest attempts to influence the ministry.

Egypt’s popular opera conductor Nayer Nagi, who met the culture minister over the dismissals, said he “did not give any reason for his decisions.”

“He is implementing an agenda,” said the musician.

“The Brothers know that it will not be easy to run the country with many intellectuals in the opposition, which is why they want to exclude them from the ministry,” he said.

Egyptian writer Helmy el-Namnam said “the Muslim Brotherhood believes that by controlling the ministry of culture, it will control Egyptian culture itself, which is nonsense.”

The minister himself insisted that the decisions were made to infuse “new blood” in the administration.

“The changes are aimed at creating a new vision, to spur a cultural movement that expresses the January 25 revolution,” he said in a statement, referring to the early 2011 uprising that overthrew president Hosni Mubarak.

The Muslim Brotherhood denies it wants to control cultural institutions.

“We want freedom for all and we also don’t refuse diversity, it exists in our movement,” Brotherhood spokesman Ahmed Aref told AFP.