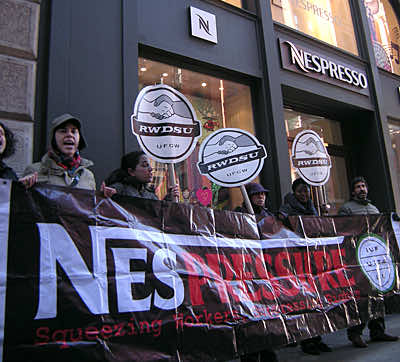 Global food giant Mondelez is seriously violating the right of workers to organise in Egypt and Tunisia, unions said Friday, lamenting that the company’s actions were undermining hard-won advances during the Arab Spring uprisings.

Mondelez, which until last year was known as Kraft Foods, has cracked down on the rights won by Egyptian and Tunisian workers during the 2011 uprisings to organise in unions, charged Ron Oswald, the head of the International Union of Food Workers (IUF).

Brands owned by the group such as chocolate giant Cadbury initially refused to talk with union representatives about legitimate grievances before suspending them from their positions without pay, he told reporters in Geneva.

“In both Egypt and Tunisia, whilst people gave their lives in some cases for those rights, one major company, Mondelez, … has decided that within the walls of their facilities and factories, those rights cannot be freely exercised,” he told reporters in Geneva.

Mondelez denied the allegations, insisting in an email to AFP: “We strongly respect our employees’ freedom of association and right to collective bargaining.”

Nasr Awad, a founding member of the EDLC union at a Cadbury factory in Alexandria, Egypt, does not agree.

He said management told its some 300 workers in July 2012 that the plant would not provide a government-decreed 15 percent pay rise for all the country’s workers.

When Awad and four other union representatives tried to complain, management refused to talk to them, he told reporters through an interpreter.

And after workers staged a sit-in, the five were suddenly suspended from their jobs.

Management thought “suspending the union leaders would lead to the collapse of the trade movement,” he said.

He and the other union leaders have not received a paycheck or health benefits since last September, he said, and as the case works its way through the Egyptian court system — something that can take years — they are also barred from applying for other work.

Mondelez said it could not comment on the specific case due to the ongoing legal proceedings.

Oswald meanwhile said IUF was helping the suspended workers and their families, insisting his union “will not allow this conflict to end simply because the workers affected cannot afford to continue.”

Oswald said union leaders at a Tunisian biscuit maker SOTUBI, partially owned by Mondelez, had also recently been forced to resign in a similar case.

Hussein Ahmed, another founding member of the EDLC union in Egypt, said he expected the workers there to prevail.

“Having fought to depose a dictatorial regime that reigned for 30 years, we as workers will be able to win our rights against the company that is trying to deny workers their rights,” he said.