by By Yassir Yousfi 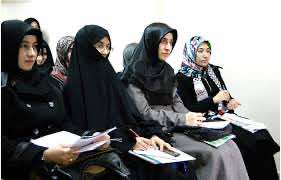 by By Yassir Yousfi

A few weeks ago Fatima Zahrae, Nisrine, and Asmae, three junior high school students at Ibn Sina in Tangier, were suspended from school for one week for wearing the headscarf.

Upon hearing of this ordeal, I wondered whether it occured in Morocco or in some secular country. I could not conceive of, nor have I ever heard of such things occurring in an Islamic country like Morocco.

This suspension is an insult to these students’ culture. Morocco has become a battleground where educators fling bitter and unjustified accusations at innocent, veiled girls. We cannot accept this behavior as being as being pursuant to individual and collective freedoms.

If we want to scrutinize the matter from a legal perspective, the principal of the junior high school committed a grave mistake. If the law were applied properly, the principal would be punished and he would lose his job, for he did not follow the correct procedure, and took it upon himself to mete out punishment. Correct procedure means that he would first refer students to the disciplinary board where they would weigh the evidence and determine what should be done.

There is no legal text that requires a uniform dress code at these schools and there is certainly no regulation in the school that bans head coverings. Moreover, according to the reformed constitution, particularly in part 2, which provides a range of rights including the right for education, the way a person dresses has no bearing on a person’s education,. The suspension also violates international agreements that support Human Rights, especially the Convention on the Rights of the Child, which is the full of rights for children in to learn and enjoy their freedom.

As long as other girls are permitted to wear tight and skin-bearing clothes, girls who wear the hijabs should also have the right to dress as they please. The students’ parents have the right to speak out against this unconstitutional action on one hand and against the unlawful abuse of power by this poor educator on the other hand.

I appeal to civic society in all its different groups to sympathize with these girls.

No doubt, the principal’s behavior only adds fuel to the flames to the crisis between the people and the state. We have enough problems with territorial integrity and artificial conflict over the Moroccan Sahara. We don’t need more headaches from juvenile arguments over a piece of clothing.

To the principal, do not be swayed into making decisions that are totally unfounded. You are a man of authority in an educational institution. Instead of punishing the girls for wearing the hijab, you should applaud them for exercising their rights and freedoms, both of which are enshrined in the constitution and international law.