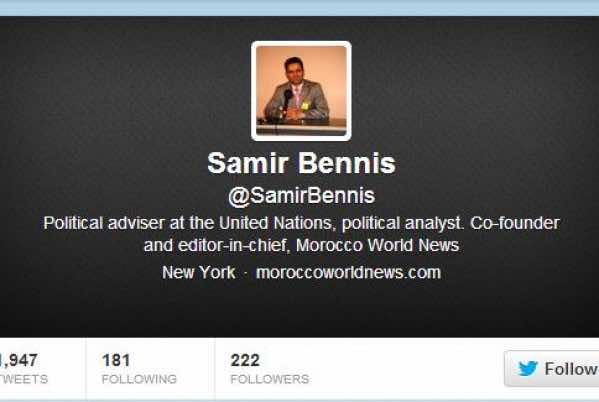 Morocco World News founder and editor in chief Mr. Samir Bennis was surprised to come across a fake Twitter account under his name with new followers, and anti-Moroccans tweets.

The new account is a very provocative and despicable maneuver forged by the enemies of Moroccan territorial integrity against Mr. Samir Bennis who professionally managed to expose the plans of the Polisario and its supporters through his investigative reports and continuous analyses.

During the recent debate over the US draft resolution which was finally withdrawn after Morocco’s pressure, Morocco world News played an important rule in defending Morocco’s position and keeping its audience instantly informed of the latest developments from within the United Nations.

Morocco World News has, in fact, been since its creation exactly two years ago a dagger in the flesh of Morocco’s enemies, especially that it addresses an international audience who has hitherto been ignorant of Morocco’s stance on the Sahara conflict.

The false account which has got only one follower so far and issued 18 Tweets has nothing to do with Mr. Samir Bennis’ official Twitter account. Remarkably enough, all the Tweets on the false account attack Moroccan sovereignty and territorial integrity in a way that is flagrantly but cowardly meant to spoil the reputation of Mr. Bennis and confuse his followers.

It’s worth noting that it’s not the first time the separatists resort to such offensive sordid acts which prove nothing but the low morale of the Polisario and its supporters who appear to lack a civilized style of debate and dialogue.

The image bellow is for the false account created by the separatists but the one attached to this news story is for the official account of Mr. Samir Bennis. 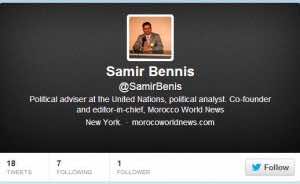