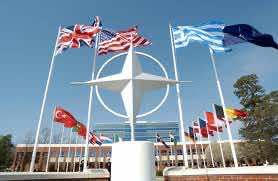 NATO defence ministers will discuss the possibility of training Libya’s military to ensure it is able to police the country’s borders properly, a senior US defence official said Monday.

The official, who asked not to be named, said the idea was at an early stage but NATO’s 28 defence ministers meeting Tuesday and Wednesday at the alliance’s headquarters near Brussels would look at the issue.

US President Barack Obama and NATO head Anders Fogh Rasmussen met Friday and talked “at great length about the way the NATO alliance could perhaps take a greater role on training for the Libyan security forces,” the official said.

“One of the issues would be what kind of training could Nato do,” the official said, noting that NATO members and partners “have developed a lot of expertise and capabilities in the past decade.”

The country’s maritime border is nearly 2,000 kilometres long, with illegal immigration to Europe from sub-Saharan Africa a major problem.

Topping the agenda for the NATO defence ministers’ meeting is cyber-security amid a recent increase in hacking attacks, many blamed on China, targeting both military and commercial information.

Ministers will also review the situation in Afghanistan where NATO forces are handing over security to local troops before their planned withdrawal next year.