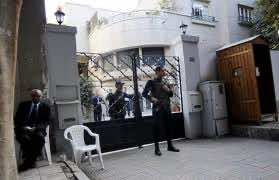 A Cairo court on Monday sentenced 43 Egyptian and foreign employees of several non-governmental organisations to jail sentences ranging from one to five years for working illegally.

Five defendants who were present in the country, including one American, were sentenced to two years behind bars while the remaining 11 defendants were given one-year suspended sentences, an AFP reporter in court said.

The court also ordered the permanent closure of the branches of the NGOs where the staffers worked.

These include US-based NGOs Freedom House and the National Democratic Institute, as well as the German Konrad Adenauer Foundation.

The defendants were charged with receiving illicit foreign funds and operating without a licence.

The trial began last year following raids of the groups’ offices which led to a crisis in relations between Egypt and Washington.