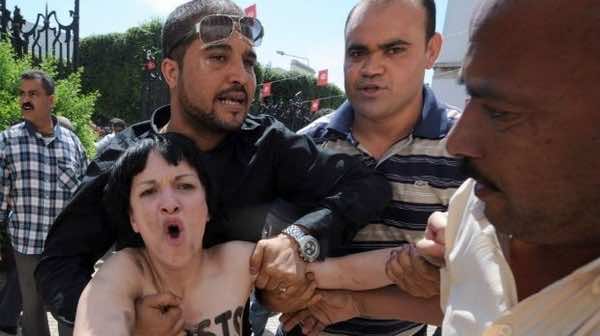 Three European women went on trial in Tunis on Wednesday for holding a topless anti-Islamist protest, and their French lawyer said he was confident about the outcome, despite the risk of jail sentences.

Pauline Hillier and Marguerite Stern from France and Josephine Markmann from Germany arrived in court around 0930 GMT wearing the traditional Tunisian veil, or safsari.

A few dozen people had gathered outside the courthouse and shouted abuse at one of the women’s Tunisian lawyers.
“How can you defend those women?” one of the people shouted. “You are not Tunisian; you are not Muslim; you don’t have a wife or daughter.”

Patrick Klugman, who came to Tunis to represent the activists from the radical women’s group Femen, said the prosecution had decided on a charge of debauchery rather than an attack on public morals.

Klugman said Femen is accused of having committed an act of debauchery, but that there are no material facts or evidence of intent to back up the charge.

“Their bodies were not exhibited to seduce but to convey a political message… which is different than debauchery,” he told AFP.

But the women still face a possible six-month prison sentenced if convicted.

Reflecting the sensitivity of the case in socially conservative Tunisia, which is ruled by an Islamist party and where hardline Salafists are increasingly assertive, a Ukrainian activist who had come to support the women was expelled from the country on the eve of the trial.

The “sextremist” movement said the expulsion, which authorities have not confirmed, was a worrying precedent.

“It’s a signal that the court will not base its judgement on the law but that its decision will be political,” Femen’s leader in Paris, Inna Shevchenko, told AFP by telephone.

The two French and one German activists staged the group’s first topless protest in the Arab world, outside the main courthouse in Tunis, on May 29.

They were demonstrating in support of Amina Sboui, a Tunisian activist arrested after painting the word “Femen” on a wall near a cemetery in the religious city of Kairouan, in an act of protest against hardline Islamists.

Sboui is also due to appear before an investigating judge on Wednesday. She faces possible charges of indecency and desecrating a cemetery.