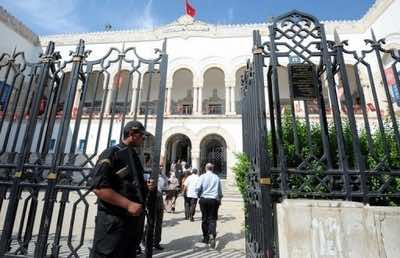 A Tunis court on Wednesday adjourned the trial of three European activists with the women’s topless protest group Femen to June 12, ordering that they remain in detention, their lawyers said.

“The trial has been adjourned to June 12. The bail request for the three Femen activists was refused,” defence lawyer Souheib Bahri.

The judge must decide at the next hearing on whether to allow several Islamist groups to participate in the trial as a civil party.

French lawyer Patrick Klugman, who had come from Paris to represent the movement, condemned the adjournment.

“Without giving a word to the Femen activists, the court has right from the beginning listened to the Salafist associations, who are not even a part of this trial,” Klugman said.

“We came from Paris to observe this trial. The trial has not taken place and justice has not been done, as the (accused) have not been freed and have not even been listened to,” he added.

The women, two French and one German, risk six months in prison for baring their breasts outside the main courthouse in Tunis on May 29, in support of a Tunisian activist with the same “sextremist” group who had been arrested 10 days earlier.