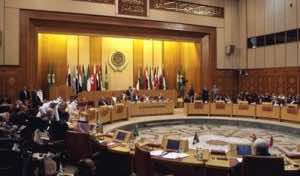 Arab foreign ministers gave their support on Wednesday to Russian and US plans for a Syria peace conference even as organisers said it would now not be held before next month.

The ministers, who met at Arab League headquarters in Cairo, called on the warring parties in Syria to negotiate an end to the 26-month civil war, saying a political solution was the only option.

They called for “efforts to persuade all the warring parties to allow logic and dialogue and negotiations to prevail in order to find a political solution between Syrians, as the only means.”

Russian, UN and US envoys failed on Wednesday to set a date for the planned conference amid persistent disagreement over who should take part.

“It will not be possible to hold this conference in June,” UN peace envoy to Syria Lakhdar Brahimi told reporters in Geneva, adding that the talks could happen “hopefully in July.”

Damascus has agreed in principle to take part in the conference, but Syria’s main opposition National Coalition has refused to attend as long as Iran-backed fighters from Lebanon’s Hezbollah movement are battling alongside Assad’s forces.