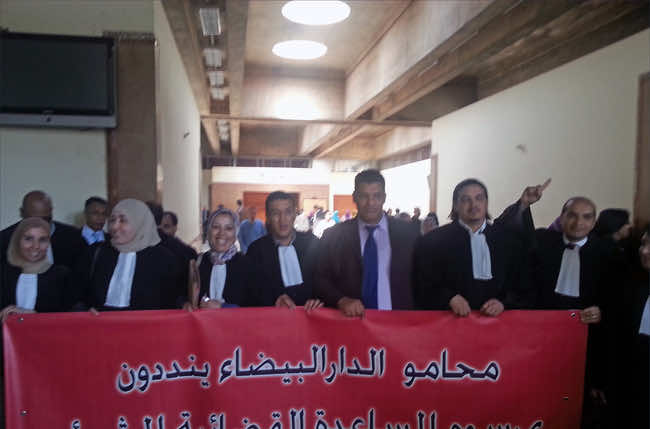 Casablanca – Moroccan attorneys are defying a justice ministry move to determine how much they should be paid for providing legal aid services.

The Moroccan Bar Association on May 30th staged sit-ins at courthouses across the kingdom. The largest of these protests was a vigil by lawyers at the Court of Appeals in Casablanca.

The association has since increased the pressure by suspending all legal aid services provided by bar members until after its national congress in mid-June.

The lawyers were reacting to the May 9th publication in the Official Gazette of a decree by Justice Minister Mustafa Ramid amending a law covering the legal profession.

Until now, lawyers had provided legal aid services for free but the decree specifically limits compensation packages for legal aid at 1,000 dirhams, 1,500 dirhams or 2,000 dirhams, depending on degree of litigation.

“This compensation does not even cover the expenses of the lawyer,” Moroccan Bar Association President Hassan Ouahbi said. “We are not expecting gratuities from anyone. The state must commit to providing defence for the indigent as well as education, health and schooling.”

Lawyers also criticised Ramid for what they said was a unilateral decision that did not take the bar’s interests into account.

“The decree was released outside the participatory framework called for by the new government,” Lawyers Forum in Morocco Secretary-General Khalil Idrissi said.

“It is a mysterious decree and unilateral too, and we do not know who stood behind it. Lawyers were excluded during its drafting and were involved at the barest minimum, even though they were the main concerned party,” he told Magharebia.

Issam Brahimi, the general co-ordinator of the May 25th Young Lawyers Movement, described the compensation packages as an affront to people in his profession.

“We prefer to keep the status quo and serve justice for free rather than accept meagre fees, such as those that have been set,” he said.

But former Bar President Mohammed Ziane opposed the idea that lawyers should receive money for representing poor people in court.

“Legal aid is a professional responsibility of the lawyer to help those who cannot afford service, because the principle of defence is to defend the oppressed, the needy and those who do not have the means to defend their rights. The principle is to help pro bono,” Ziane told Magharebia.

Responding to the bar’s decision to suspend legal aid services, the justice ministry issued a statement saying that activating the decree’s requirements remained “dependent on the will of the lawyer”.

The ministry went on to remind lawyers that, for years, they provided legal aid without compensation. In its statement, the ministry said it had stuck to an agreement to consult with the bar association about the issue.

The statement quoted Justice Minister Ramid as saying that the ministry had agreed to hold off on publishing the decree because the bar had not agreed to the terms for compensation. But an inter-departmental miscommunication led the government’s secretariat general to publish the decree, although his ministry had asked the secretariat to withhold publication, he said.

“We contacted the concerned department … and it agreed to postpone it, but then published it,” Rashid said.