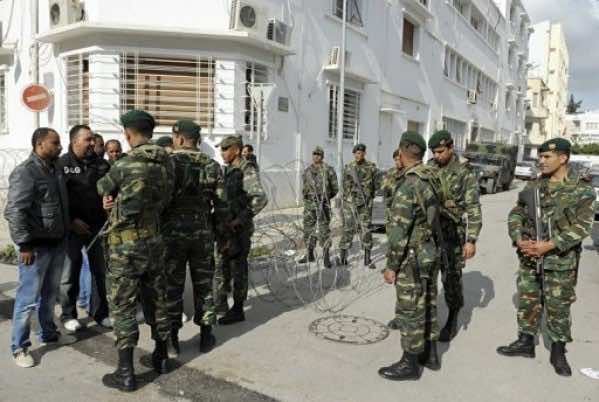 A roadside bomb killed two Tunisian soldiers on Thursday in the mountainous border region near Algeria where security forces have been hunting Al-Qaeda linked jihadists, with the government warning of a “dangerous evolution.”

“At around 7:45 am (0645 GMT), two soldiers were killed and two others wounded when a device exploded as their vehicle passed by in the Doghra area of Mount Chaambi,” said spokesman Mokhtar Ben Nasr.

The defence ministry said the blast occurred in a populated area.

“The bomb was placed on a path next to the Chaambi park in a populated area. We consider that a dangerous evolution given that everyone who uses this path, citizens, soldiers and security forces, are targets,” it said.

A security source in Kasserine, the regional capital, told AFP one of the wounded soldiers could lose his leg.

Mount Chaambi is a rugged frontier region where the Tunisian army has been tracking militants the government says are veterans of the Islamist rebellion in northern Mali with links to Al-Qaeda in the Islamic Maghreb (AQIM).

The authorities have been hunting the extremist group since December when it attacked a border post, killing a member of the national guard.

The army has intensified its search since the end of April, using mortar fire and dogs, after home-made landmines planted by the jihadists to protect their base wounded a dozen soldiers.

In all, around 20 soldiers have been injured by bombs but the latest attack marks the first deaths.

Residents of Kasserine demonstrated on Thursday afternoon to condemn the violence.

Last weekend, three soldiers were wounded in the Mount Chaambi area when a landmine exploded underneath their vehicle, and another was accidentally shot dead by colleagues during a separate operation there.

The authorities say none of the militants – a group of about 30 Algerians, Libyans and members of Tunisia’s radical Salafist group Ansar al-Sharia — has so far been killed in the western region.

Interior ministry spokesman Mohamed Ali Aroui said on Friday that 45 “terrorists” linked to the group have been arrested since December.

He said the cell was called the Okba Ibn Nafaa brigade, after a 7th century Arab leader who brought Islam to Tunisia, and was preparing attacks against the Tunisian security forces.

The army said last month that it had dismantled their base in Mount Chaambi, where they found tents, explosives, maps and mobile phones used by the group.

Since the revolution that ousted Zine El Abidine Ben Ali, Tunisia has been rocked by waves of violence blamed on hardline Islamists who were suppressed under the former dictator.

At the same time, AQIM saw its fortunes revived by regime change in Libya in 2011 and the Islamist rebellion in Mali.

The regional danger posed by Islamists was starkly illustrated by the deadly hostage attack on Algeria’s In Amenas gas plant in January. Eleven of the 32 assailants were Tunisian.

Ansar al-Sharia is the most radical of the extremists groups to have emerged in Tunisia. The government accuses its fugitive leader, a former Al-Qaeda fighter in Afghanistan known as Abu Iyad, of orchestrating an attack on the US embassy last September.

In the past, the Salafist movement has denied any link to the militants being hunted in the remote border region.

The ongoing military operations in Mount Chaambi are considered the most serious in Tunisia since clashes in 2007 between the army and a group of around 30 Islamists in Soliman, near the capital, in which a soldier, two policeman and 11 Islamists died.