German Chancellor Angela Merkel Friday called for a fair trial of European topless activists in Tunisia after a protest by bare-breasted demonstrators outside her offices.

Following talks with visiting Tunisian Prime Minister Ali Larayedh, the target of the morning protest in front of her Berlin offices, Merkel said they had discussed the human rights situation in his country.

She said that Germany was following particularly closely a Tunis trial of three European demonstrators who remain in custody following a protest last month in support of a detained Tunisian activist from the radical feminist group Femen.

“We spoke about it and said that we from the German perspective hope for a fair and reasonable approach to the proceedings under the rule of law,” she told reporters.

“We articulated our expectations knowing that the government and the justice system are different state institutions.”

Larayedh said attention to the case should not take on “outsized” proportions.

“The rights of the youths are being protected,” he said, referring to the detained women.

The three protesters chanted “Merkel free Femen” and two of the activists had the first names of the women in custody in Tunis scrawled in black ink across their bared torsos.

One of the demonstrators wore a black hood over her head.

Officers dragged the women away from the iron security fence surrounding the building.

A Tunis court on Wednesday adjourned the trial of the three European Femen activists, ordering that they remain in detention.

The women, two French and one German, risk six months in prison for baring their breasts outside the main courthouse in Tunis on May 29, in solidarity with a Tunisian activist with the same “sextremist” group who had been arrested 10 days earlier.

The case has been seen in the West as a test of democratic freedoms under Tunisia’s Islamist-led government.

At an industrial fair in the northern German city of Hanover in April, Femen activists disrupted a tour by Merkel with visiting Vladimir Putin and shouted obscenities at the Russian president. 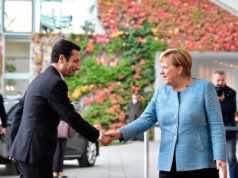 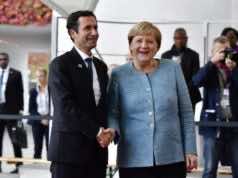