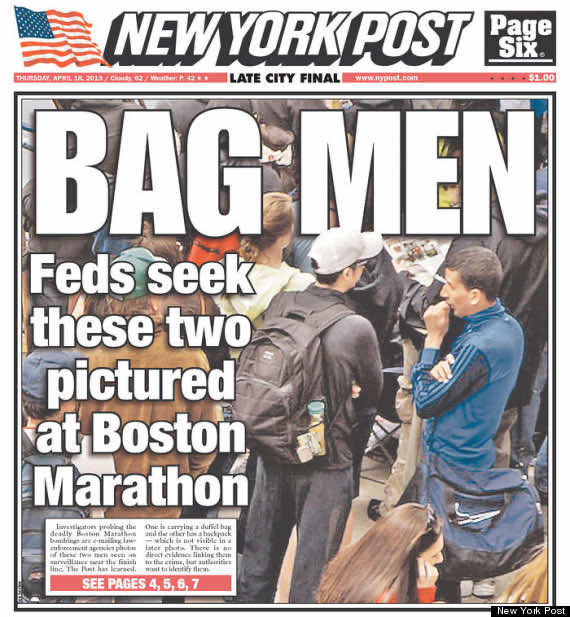 The two young Moroccans, who were accused of being portrayed as the perpetrators of the Boston bombing, filed a lawsuit against the New York Post for libel, negligent infliction of emotional distress, and invasion of privacy.

Following the havoc created by the tragic Boston bombings, two Moroccans were shocked to find their picture on the front page of the tabloid newspaper the New York Post with the giant headline “Bag Men: Feds Seek these two Pictured at Boston Marathon.” The men in the picture were the young Track and Field runner Salah Barhoum of Revere and his friend Yassine Zaimi of Malden whose curiosity and love of running drove them to stand near the finish line at Boston Marathon.

The picture of the two innocent young men on the front page of the NY Post had a significant impact on their psyche, and sense of security because it subjected them to hatred, scorn and contempt in the mind of a large section of the Bostonian community.

With the recurrent threats and insults against Muslims who were held responsible for the deadly bombings, Salah Barhoum and Yassine Zaimi started feeling insecurity, especially after repeatedly meeting staring eyes and pointing fingers!

On Wednesday June 5, Salah Barhoun and Yassine Zaimi filed a defamation lawsuit in Suffolk Superior Court against the NY Post accusing it of describing them as suspects in the deadly marathon bombings. The lawsuit accuses the NY Post of libel, negligent infliction of emotional distress, and invasion of privacy and asks for compensation for the damage the false insinuations by the NY Post had caused to the young men who left Morocco four years ago in search of better life conditions in the US.  Morocco World News has contacted Salah Barhoun for comments on the latest developments in this affair but he declined to comment on it.

” I am suffering emotional distress because of this and I can’t talk about it for now,” he told MWN on Thursday.