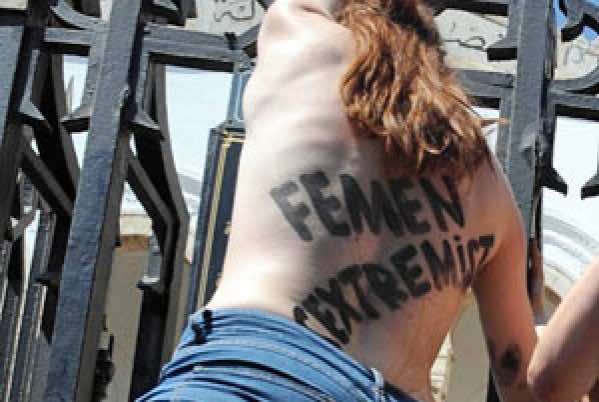 The Femen movement began in 2008 in Ukraine with a group of women activists, as a reaction to sexism, sex tourism, religious institutions and other social national and international issues. The Femen women have been trying to fight for women’s total freedom of thought and action, which they express through topless protests.

Lately, a young teenager from Tunisia under the nickname of Amina Tyler posted a topless picture of her, which stirred great fury among Tunisians, especially radical Muslim groups.

As a feminist, I think that there is more to the issue than just what we perceive. It has become bigger especially with the coming of European feminists to Muslim countries to perform those topless protests. Just like the colonizer came to colonize hiding behind the excuse of civilizing the uncivilized, I see the coming of those western feminist with the excuse of freeing women as a way of destroying the Muslim society.

After all, we are Muslims and we find it inappropriate to go out to the streets naked because it is against our values of respect and decency. I personally see such protests as a way to destroying our cultural and social values and eventually creating chaos that would do only harm to our society.  I’m trying to look at the problem deeply and trying to analyze more than what meets the eye. I think it is going too far and it is no longer merely about Amina tyler, but a question of breaking up the Muslim community and demolishing our own identity.

Yes, I am with the freedom of expression and against all kinds of thought restrictions. I am for promoting the status of women throughout the Arab world and allowing them to enjoy their inalienable rights, in equal footing with men. I do respect the Femen ideology, but I disagree with the way those women chose to express their standpoint.

I strongly believe that there are other means with which to fight for women’s emancipation and liberty. In other words, I don’t find the act of protesting naked in the streets of much relevance. I am against such acts simply, because they are a violation of public morality, neither more nor less.

In fact, my body is my own and I am free to treat it the way I want. But I would not go around naked to tell the world that I am free, because this no how we can promote women’s emancipation. This is kind of behavior shows rather the immaturity of those women and their lack of knowledge about how one can advance women’s cause.

I am simply against extremism. Just like it is considered extreme to restrain women’s freedom by treating them as a sexual object and making them hide behind tons of clothes, it is equally extreme  to see some women consider the exhibition of their naked bodies as freedom, for it defeats the purpose of being against the Thing-ification of women.