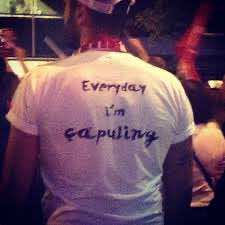 Turkey’s prime minister meant it as an insult when he dismissed protesters as “capulcu” — “vandals” or “looters.” But they’ve become fond of it, adopting it as their nickname and spreading it via Facebook and Twitter.

It is just one in a flood of edgy jokes and slogans that have kept the young Turks chuckling in between bouts of being chased by police with tear gas and water cannon at protests against the premier, Recep Tayyip Erdogan.

“The looters are coming!” the protesters yell.

Pronounced “cha-pul-ju” in Turkish, the word morphed into “chapulling”, spreading the concept among English-speaking users on online social media, among an avalanche of humorous videos and slogans inspired by the crisis.

In a language full of words notoriously slippery to translate into English, the term has been altered by sympathizers of the protests into a synonym for “fighting for your rights”.

In a gesture of solidarity with the demonstrators, one online Turkish-English dictionary, Zargan, listed “chapulling” as an “English” word meaning “claiming rights,” “demanding to be treated as a human being” and “resisting pressure”.

The user-generated online encyclopedia Wikipedia also added “chapulling” to its database, defining it as “a neologism originating in the 2013 protests in Turkey, derived from Prime Minister Erdogan’s use of the term capulcu to describe demonstrators.”

One of Turkey’s leading businessmen Cem Boyner, head of Boyner Holding, joined the protests at Istanbul’s Taksim square with a banner reading: “I’m neither rightist, nor leftist. I’m chapulling.”

Other wags in Istanbul, Ankara and other Turkish cities, are using a more traditional medium to share their jokes: covering the walls with signs and graffiti — many of which also end up on the Internet.

One of the signs posted on Facebook punned on the words of a popular dance tune “Satisfaction” with a “chapulling” theme, reading: “Cop me, and then just gas me, till I can get my chapulation.”

“Tear gas is making us drunk,” read one, in a compilation on blogging platform Tumblr, combining criticism of the police crackdown with popular anger at Erdogan’s plan to restrict the sale of alcohol.

“Tear gas is our national drink,” read another, mocking Erdogan for telling Turks to adopt a non-alcoholic yoghurt drink as the country’s token beverage.

Turkish mainstream television stations themselves handed the protesters ammunition for ridicule by their timid reporting at the start of the unrest, with one broadcasting a documentary about penguins instead of covering the crisis as it broke.

That drove “penguin” along with “chapulling” up the list of Turkish users’ favorite buzz words.

Some youngsters have been wearing T-shirts inscribed: “We are all penguins.”