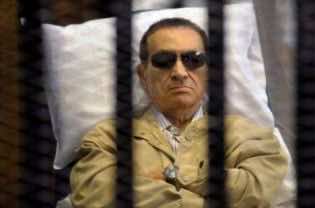 An Egyptian court in the retrial of fallen dictator Hosni Mubarak for alleged complicity in the killings of protesters barred lawyers in civil cases from the proceedings at a brief session on Saturday.

Mubarak, 85, watched the proceedings while sitting up on a stretcher inside the defendants’ cage, shared with seven of his former security commanders and his two sons.

His original trial led to a life sentence for Mubarak and his interior minister Habib al-Adly, and acquittals for six police commanders.

But an appeals court ordered a retrial, citing procedural errors.

One of the main lawyers filing civil suits, Sameh Ashur, told AFP Rashidi’s ruling would not have a major impact on the proceedings.

But the decision angered the lawyers in the makeshift court in a police academy lecture hall outside Cairo.

“The people demand the cleansing of the judiciary,” they chanted.

Mubarak’s lawyer Farid al-Deeb appeared visibly satisfied with the ruling. He had demanded the same of the judge in Mubarak’s first trial.

Before adjourning the session, Rashidi said the court would examine a request to jail three out of six police commanders on trial with Mubarak for their alleged involvement in the deaths of protesters during the early 2011 uprising.
The three police commanders have not been remanded in custody but attend
every hearing.

All of the defendants have pleaded not guilty to the charges against them.

In the retrial’s opening session on May 11, Rashidi issued an emotional appeal for order, saying he understood “frustration” with the process.

He also said there would be new evidence presented in the case, which now includes 55,000 pages of documents.

In the first trial, the court had contended with patchwork evidence gathered by the prosecution, which blamed police for not fully cooperating in the investigation.

Egyptians remain polarised by the legacy of the former leader, as the country struggles to move forward under the new regime of Islamist President Mohamed Morsi, elected in June 2012.

Today the country is in disarray, with Morsi’s tenure marked by political division, repeated violence and a crippling economic crisis.