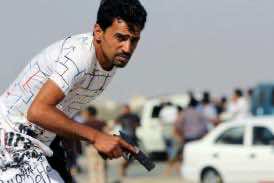 At least seven people died and 30 were wounded on Saturday when demonstrators attacked the headquarters in Benghazi of former rebels who had fought to oust Libyan dictator Moamer Kahdafi, a hospital official said.

“At least seven people are dead,” said a doctor at Al-Jala hospital in the eastern city, which was the cradle of the anti-Kadhafi uprising in 2011.

“We also have received some 30 wounded,” he added, saying the toll could could rise.

Fighting erupted after dozens of demonstrators, some of them armed, tried to dislodge the powerful “Shield of Libya” brigade from its barracks in Benghazi, said an AFP correspondent at the scene.

They encircled the the headquarters and called on regular security forces to step in.

Libya’s post-Kadhafi authorities, who have still not managed to form a professional new army and police corps, often call on the “Shield of Libya” to intervene in the various tribal conflicts that trouble the country.

In October, people in Benghazi managed to force other militias from their bases.