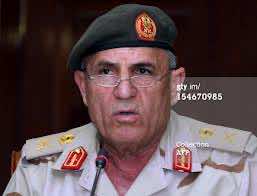 “The chief of staff presented his resignation that was accepted by the congress,” General National Congress member Abdullah al-Gmati said, adding that the body had already been preparing to suspend him.

Another member said Mangoush’s resignation was approved by a vote, and Gmati said the GNC has given the government two weeks to put into place a plan to dissolve armed groups and integrate them into the regular security forces.

Saturday’s clashes flared in the eastern city of Benghazi after dozens of demonstrators, some of them armed, tried to force the powerful “Shield of Libya” brigade from its barracks, an AFP correspondent reported.

They encircled the headquarters and called on regular security forces to step in, saying they wanted rid of armed militias in the city.

The “Shield of Libya” is mostly made up of rebels who battled dictator Moamer Gadhafi in 2011, and is formally under defence ministry control.

The official LANA news agency quoted a source at Al-Jala hospital in the eastern city – cradle of the 2011 uprising that ousted Gadhafi – as saying the fighting had killed at least 31 people and wounded 100 more.

The dead were buried on Sunday to cries of “the martyrs’ blood was not spilled in vain”, as several hundred mourners gathered in Al-Hawari cemetery near central Benghazi, an AFP correspondent said.

The funerals took place in a calm atmosphere, but several young men vowed to meet later to protest against the “massacre of civilians by militias”.

Before Mangoush’s resignation, the GNC called in a statement for calm and restraint on all sides “for the benefit of the national interest”.

It said that the GNC was “in contact with the government and security bodies” with a view to taking “decisive measures”.

Libya’s post-Gadhafi authorities, who have still not managed to form a professional new army and police corps, often call on the Shield of Libya to secure borders and intervene in the various tribal disputes that trouble the country.

The brigade is the largest and best equipped of the ex-rebel militias. Wissam Ben Hamid, a former rebel in his forties known for his ties to Islamists, commands it.

Prime Minister Ali Zeidan said late Saturday that the Shield of Libya had evacuated its Benghazi headquarters and the regular army had taken control of the building and heavy weapons there.

Regular troops were also set to take control of three other buildings used by the brigade in Benghazi, an army spokesman said on Sunday.

But the brigade may not be disbanded.

Mohammed al-Maadani, an academic from Benghazi, told AFP he thought such a move was unlikely.

“The state cannot do without these ex-rebel brigades” for the time being, he said.

Maadani said “the authorities have trusted the former rebels with missions that the army (which is currently being trained) is unable to perform at the moment, such as monitoring borders”.

“But every time it is the state that loses its credibility by giving legitimacy to these ex-rebel groups that the population has rejected,” he added.

In October, Benghazi residents managed to force other militias from their bases.

The government has been unable to disarm and disband the ex-rebel militias that still control areas of the country and is trying to absorb some of them into the security forces despite public opposition.

Violence has been on the rise in Benghazi in recent months, with several attacks on Western-linked targets and security officers.

Mangoush had been forced to defend himself against allegations that he was defending and legitimising armed groups made up of former rebels, who still wield much influence.

In May, the GNC had already decided to replace Mangoush, but said it had yet to decide on criteria for his replacement.