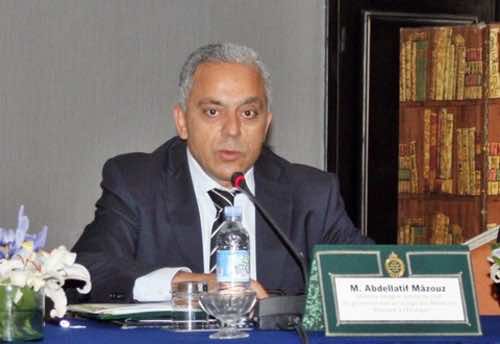 By
Adnane Bennis
-
Adnane Bennis is a national of Morocco, obtained his Bachelor’s Degree in Computer and Information Science from East west University in Chicago.
Jun 10, 2013
Spread the love

This trip was carried out with the intent to engage the Moroccan Diaspora to collectively and proactively participate in the betterment of the social climate of their homeland both internally and externally. Dr. Maazouz’ trip was also an opportunity for Moroccan expatriates also known as “Aljaliya” to meet with one of its representatives and interact through an open forum of question/answers format to discuss the issues Moroccans face as immigrants both abroad and in Morocco. Mr. Maazouz also scheduled a number of official meetings with American counterparts to discuss bilateral partnerships to cement the long standing cultural, educational and economic collaboration between Morocco and the US.

One can only applaud such initiatives taken by the Minister and hope for more opportunities in the future to foster a better understanding and interaction between expatriates, their representatives, and other public officials. I had the privilege to meet with Dr. Maazouz on two separate occasions on June 2nd in Washington DC and my impression of the cordial encounters are positive and indicative of the official’s intent and eagerness to listen to the Moroccan residents issues of concerns and/or grievances towards what they consider “Morocco’s neglect” to their communities abroad.

It was somewhat apparent from the initial meetings Dr. Maazouz had with the Moroccan community that many concerns and issues must in future meetings be prioritized to better use the Minister’s time and address the Moroccan community’s most urgent concerns. The agenda of meetings was initially organized to focus on discussions on how to enhance Moroccans’ participation and integration in their host country. Other talking points centered on how to visualize a long term involvement of professionals and businessmen with their home country, and ultimately set a creative and proactive mechanism to alleviate and overcome some of the problems Aljaliya experiences across the board. Unfortunately the meetings took different turns due in large part to a lack of disciplined dialogue in prioritizing issues among the Moroccan community participants; I took this opportunity to raise this issue that will hopefully be addressed to make future meetings more fruitful. Personal and trivial matters took the lead over real and critical issues that must have been discussed. This, if anything, shows our shortcomings at the political and cultural levels and reveals a lack of discipline on how to exercise the right to share information with our representatives.

No one can deny the crucial importance of parallel Diplomacy in promoting Morocco’s cultural heritage and political stances, notably regarding the Sahara conflict. We all know that Morocco suffered a number of setbacks at the diplomatic level. This is due largely to a lack of understanding in the America’s public opinion of the issue of Morocco’s territorial integrity. This was blatantly apparent when the US presented a draft resolution to the United Nations to upgrade the mandate of MINURSO to include a Human Rights mechanism in the Sahara.

In this regard, what Morocco expects from its community to see it fully involved in US politics and in creating a strong advocacy that would likely engage policy-makers to understand the Moroccan position and take favorable positions that would be in the best interest of Morocco’s territorial integrity. What Morocco expects from its community is a civic commitment that goes beyond the routine ticket lowering of airline fares, or self-serving associations that are created to for purposes of unfocused funding. What Morocco needs is a community capable of making a difference both in its country of residence and its country of origin by means of bridging the cultural gaps and innovative ideas which benefit both countries.

Associations are much needed to organize our communities, give them a sense of belonging and ease their daily problems, especially among the new comers. Yet, what kind of association are we talking about? Do we need small groups that organize friendly gatherings, barbeque parties and soccer tournaments? Are our issues concentrated in social, economic and/gender specific? Certainly, our main problems do not revolve around the Royal Air Maroc clichéd complaints. The latter is bound by the law of offer and demand. If one is not satisfied with its services, then the solution is simple: fly different airline.

Dr. Maazouz said that associations should take the lead and play a significant role into advancing Moroccans wellbeing and Morocco’s image among Americans, taking into consideration that “every individual should look at oneself as an ambassador of one’s country.”

One can only commend such views. However, Moroccans in America do not have associations, Dr. Abdetatif Maazouz. We, unfortunately, have groups of individuals, there are some exceptions though, and who claim to have civil society organizations, taking advantage of the lack of involvement among Moroccan Americans and benefiting from the financial support the Moroccan Government offers. These pseudo-organizations are but a privileged, restricted clubs for self-interest.

While organizing ourselves within civil society associations is an initiative that must be encouraged and supported, we do not need 80,000 associations for the 82,000 Moroccans living in America, according the official 2010 census. It looks like we still care about the form, while we neglect the substance. We seek leadership while we lack transparency and the courage and expertise to lead.

Our issues of concern here in the US are not lack of funding, the absence of volunteerism or expertise. Our main crisis is the lack of trust among Moroccans all over the host country.

Many residents still remember the NYPD’s “Moroccan initiative,” which singled out the 9000 Moroccan residents in New York City to compile detailed intelligence campaign by putting them under surveillance. Many others were annoyed to the crippling silence over this stereotyping and were wondering “Why do we not have a voice that speaks on our behalf to dismiss the said initiative?” and build a strong, influential advocacy that can be heard and listened to when needed.

For this reason, we urgently need to have foresight and think for the future. We ought to seek a high level representation and gather our efforts into one strong unbiased, ideologically free organization. One that will incorporate all Moroccans from the east coast to the west coast. One that will take the initiatives and talks to policy makers and discuss ways on how to enhance our situations and give us leverage to use. This is the Parallel Diplomacy we must seek. That an inequity suffered by one individual is a threat to equity and fairness of the whole community. To this end, the association can be self-funded through monthly memberships and donations by the well-to-do and philanthropists.

Let’s assume a $10 monthly membership dedicated to our causes. If we do the math, we can gather $820,000, which is approximately $10 million a year. I think we should think outside the box and start asking ourselves critical and challenging questions beyond the generic superficial ones as “we lack funding.”

I think Dr. Abdetatif Maazouz’s visit came with strong messages to deliver to all parties concerned. Morocco has realized that the importance of reaching out to Moroccans living abroad, especially in the US; Morocco is willing to engage with them in order to address some of the problems they may face. Still, Morocco is expecting its community to build strong lobbies through which they can have a say in the political ice of the country where they live and influence its decision makers. Most importantly, it expects them to bring the expertise and the know how to help their country of origin compete internationally.

To paraphrase JFK’s famous speech, the time is now to start asking ourselves as Moroccans living abroad what we can offer as members of our communities and citizens our country instead of asking what they can offer to us. While we have the unwavering support of our Moroccan representatives to consult with and help us when needed, our strength is in our numbers to unite and build this community on strong foundations and embrace one another to the better of our children’s future; hopefully we can learn from our past mistakes and our children will not be mired in the same structural problems and obstacles we all went through.