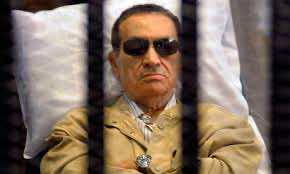 Toppled president Hosni Mubarak’s retrial was adjourned until July on Monday after new documents and videos were submitted over his alleged complicity in the killings of protesters during Egypt’s 2001 revolution.

The criminal court in Cairo, on a technicality, also ordered the release of his two sons, Alaa and Gamal Mubarak, who have been on trial along with the former leader on corruption charges.

The maximum two-year period of preventive detention has run out but the brothers are unlikely to walk free because of other charges against them, a judicial source said.

“The court orders their release so long as they are not being detained in other cases,” said Judge Mahmud al-Rashidi, who set July 6 as the date for the next hearing in Mubarak’s trial.

In the latest hearing, cartons filled with police notebooks and videos of demonstrations on Cairo’s Tahrir Square, epicentre of the 2011 revolt during which almost 850 people died, were submitted to the court.

The defence asked for an adjournment to study the new material.

Mubarak, 85, in white prison uniform and dark glasses, was present in the cage holding the accused, along with his sons, former interior minister Habib al-Adly and six former police commanders.

His original trial led to a life sentence for Mubarak and Adly, and acquittals for the six police commanders. But an appeals court ordered a retrial, citing procedural errors.