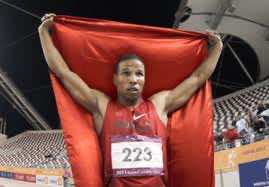 Another silver medal was won by Siham Hilali in women’s 800 mteres behind Russian Ekaterina Poyistogova.

The meet was marked by three new records. The first record was achieved in men’s 100m by the French Christophe Lemaitre (9.98), who advanced US Justin Gatlin (10.02) and Kim Collins from Saint Kitts and Nevis (10.10). The Moroccan Aziz Ouhadi finished fourth in this competition (10.19).

The second record of the meet was set in women’s 800m by Russian Ekaterina Poyistogova with 1:59.80.

The meet brought together about 150 athletes from 43 countries.