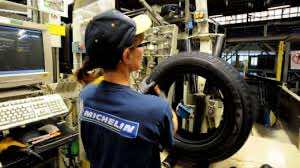 Tyre maker Michelin said Monday it would stop making truck tyres at one of its French factories by 2015, slashing 700 jobs, due to plummeting demand in Europe.

Michelin said in a statement that it would cease the manufacture of truck tyres at its Joue-les-Tours site in the country’s west and concentrate production on its factory at La Roche-sur-Yon, also located in western France.

The company said that only 200 of the 930 people currently employed at Joue-les-Tours would retain their jobs.

None of the redundancies will be compulsory with 250 workers to be offered early retirement and the others offered posts at other Michelin sites in
France.

Michelin also announced that it will end production of truck tyres in Algeria by the end of this year. Its facilities in the north African state are to be taken over by Algerian company Cevital which has pledged to offer jobs to Michelin’s 600 employees.

Michelin has been hit hard by the depressed state of the car market in France. French car sales fell 10.3 percent in May to 148,554 units against 165,691 a year ago, according to the CCFA industry body.