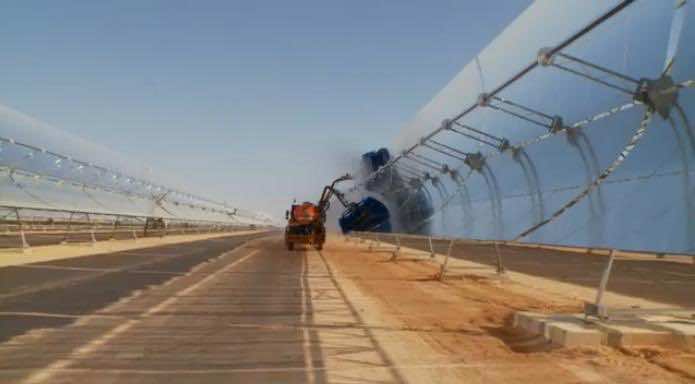 In 2009, Morocco launched a huge program that will make the kingdom a leader in solar power production by the end of the decade. Morocco plans to build five new solar plants by 2020 with a combined production capacity of 2,000 megawatts and at an estimated cost of nine billion dollars or 6.9 billion Euros.

Since Morocco has no oil and gas reserves, it is hoping, with the solar projects, along with many planned wind plants along its Atlantic coast, to increase renewable energy production to 42 percent of its total power supply by 2020.

The first solar project is now under construction. Ain Beni Mathar plant is considered the world’s biggest concentrating solar project. The first 160 megawatt phase is being built by a consortium led by Saudi developer ACWA Power. It should come online by 2015. That will grow to 500 MW by 2020, covering 3000 hectares at a cost of $1.4 billion. It will supply electricity to Ouarzazate’s 1.5 million residents.

According to the African Development Bank, this plant combines solar and thermal power. It enables the National Office  of Electricity (ONE) to diversify its energy sources, increase its production capacity from 200 to 250 MW by 2012 and to supply the interconnected system with nearly 1590 GWh per year, of which 55 GWh will come from solar, and save on fuel costs.

Financing for this program is coming from the World Bank, Global Environment Facility, African Development Bank, European Investment Bank and other institutions.

According to the Moroccan Agency for Solar Energy (MASEN), in addition to electric production, this project includes training, technical expertise, R&D, the promotion of an integrated solar industry, and possibly the desalination of sea water. This large-scale project will be based on targeted and well-balanced public-private partnerships (PPP’s) with reference players.

As the World Bank puts it, “Morocco is ideally positioned to serve European markets and to use this positioning to take a technology and market lead.”

Thanks to the exploitation of the solar potential, the project will contribute to the reduction of the reliance on energy, environmental preservation, through the limitation of CO2 emissions and to climate change control.