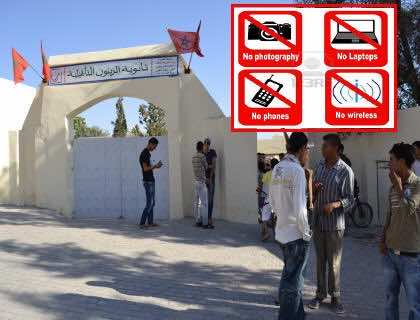 Eight individuals were arrested today for cheating during the baccalaureate exams, the Ministry of National Education announced in a statement.

The arrest of these individuals was achieved “in full coordination between the National Security services and the Royal Gendarmie, along with the assistance of local authorities,” noted the Ministry of National Education.

The same source announced that one of the candidates was arrested for using a sophisticated electronic communication device to cheat during the exam. The individuals contacted by the same candidate via the electronic device were also arrested.

According to the Ministry, two other independent baccalaureate candidates were arrested on Monday morning at a private test center in Sale, near the capital Rabat while taking the exam.

The second independent candidate was also arrested in Sale for climbing the front wall of a school after failing to show up for the baccalaureate exam on time.

The ministry also affirmed that investigations are still underway to find those responsible for posting leaked baccalaureate exam sheets on Facebook pages and groups.