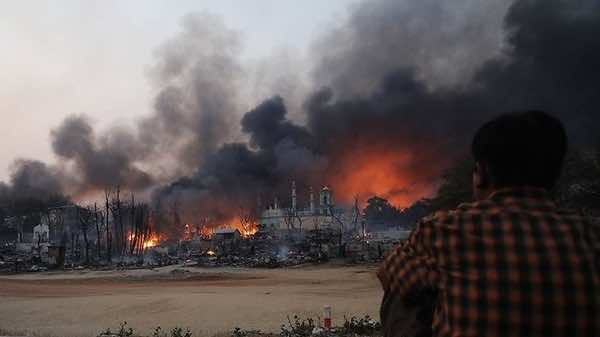 Buddhist monks from across Myanmar will gather on Thursday for talks about the religious violence that has shaken the country, after some of them were implicated in attacks on Muslims.

Around 200 Buddhist clerics have been invited to the meeting at a monastery outside Yangon to explore ways to ease tensions, according to Dhammapiya, a monk acting as a spokesman for the event.

“Foreigners think that the violence in Myanmar is being led by Buddhist monks,” he told AFP on Wednesday, adding that while several monks had taken part in attacks, many more were mistaken for perpetrators as they tried to intervene to halt the mob violence.

“Monks collectively will discuss how to stop people committing violence and how to help the government solve the problem,” he said.

Wirathu, a monk from Mandalay whose anti-Muslim remarks have come under recent scrutiny, is among those due to attend, he said

In central Myanmar, where dozens of people were killed in March and thousands of homes set ablaze, AFP journalists saw some people in monk robes wielding sticks and knives during the unrest.

Monks – once at the forefront of the country’s pro-democracy movement – have also spearheaded a campaign to shun shops owned by Muslims and only to visit stores run by Buddhists.

Dhammapiya denied that the campaign known as “969” was responsible for several episodes of violence around the country this year, most recently in the eastern state of Shan in May.

A Muslim man was sentenced to 26 years in prison on Tuesday for an attack on a Buddhist woman that triggered the clashes in Shan.

Muslim leaders welcomed the monks’ planned talks, saying they hoped the clerics would help to change Buddhists’ perceptions of them.

“It’s much better if Buddhist monks tell people that their views of Muslims are wrong, rather than us trying to explain,” Aye Lwin, chief convener of the Islamic Center of Myanmar, told AFP.