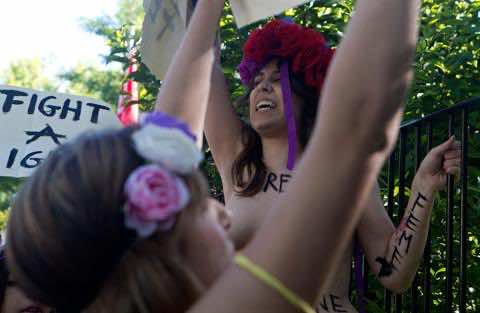 Three women staged a topless protest Wednesday outside the Tunisian embassy in Madrid calling on Tunis to free three fellow activists detained for a bare-breasted anti-Islamist demonstration in the north African nation.

The members of radical feminist group Femen removed their shirts to show their breasts and messages daubed on their bodies calling for the release of the trio who are behind bars in Tunis.

“Femen is here today protesting because in Tunisia they have jailed three of our activists who are being judged today just for defending themselves and going to protest for the rights of women in Tunisia,” said one of the Madrid protesters, Lara Alcazar.

The three protesters held aloft placards reading: “To Fight Is a Right”, “Free Femen” and “Imprisoned for Being Feminists”.

Police did not intervene in the protest, which lasted about 10 minutes and attracted a few onlookers including some peering from the windows of the Tunisian embassy.

Pauline Hillier and Marguerite Stern of France and German Josephin Markmann were arrested on May 29 after baring their breasts outside the main courthouse in Tunis in support of Amina Sboui, a Tunisian activist with the same “sextremist” group who had been arrested 10 days earlier.

They risk six months in prison and have been denied bail. Their trial in Tunis was to resume Wednesday after being adjourned last week.