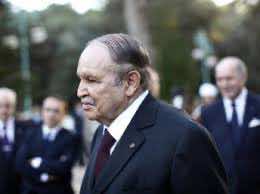 The first pictures to emerge of Algeria’s President Abdelaziz Bouteflika since he was hospitalised in France in April after a mini-stroke were published by the national APS news agency on Wednesday.

Wearing a dressing gown, he was pictured on Tuesday receiving Algeria’s Prime Minister Abdelmalek Sellal and army chief Ahmed Gaid Salah in the Paris hospital where he is convalescing.

The pictures were published to dispel rumours circulating in both Algiers and Paris about the 76-year-old president’s condition deteriorating.

Following Tuesday’s two-hour meeting, Sellal said Bouteflika had given detailed instructions on running the country, adding that he had “responded very well and his health seemed fine”.

Shortly beforehand, a health bulletin was published by the state news agency, in which the president’s doctors in Paris had “recommended that he observe a period of convalescence and functional rehabilitation to consolidate his recovery”.

It said that Bouteflika had suffered a transient ischaemic attack, or mini-stroke, on April 27, which had “not affected his vital functions”, and that he had been transferred to the Val de Grace hospital in Paris for further tests.

Bouteflika’s health has been a source of speculation in Algeria since 2005 when he had surgery at the same Paris hospital for a bleeding stomach ulcer, according to officials, and spent a long period convalescing.

The president’s latest health-related absence has prompted local media to increasingly question the implications for Algeria’s government, given Bouteflika’s central constitutional role in running the country.

It has also sparked intense discussion about next year’s presidential elections, now that it appears extremely unlikely that he will seek a fourth term.

Calls have grown in the Algerian press for the application of Article 88 of the constitution, which provides for the transfer of power if the head of state falls seriously ill.

Bouteflika rose to power in 1999, and was re-elected in 2004 and again in 2009, after changes to the constitution allowed him to run for more than two terms.