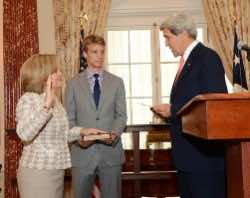 Nine months after the US ambassador to Libya was killed in an attack, Secretary of State John Kerry has sworn in a new envoy, vowing she would play a key role as the country moves toward democracy.

Long-time diplomat Deborah Jones took the oath of office on Tuesday to replace Chris Stevens in a ceremony at the State Department.

For Jones, a fluent Arabic speaker, her diplomatic career is “not a just a job; it’s a calling. It’s a mission, and she shares that with her predecessor, Chris,” Kerry said.

He said Jones would embody in her work “the dream of the Libyan people to be free and to exercise their rights and to enjoy democracy,” stressing that the next few years were going to be critical to the country’s transformation.

Stevens, who had been popular with the Libyan people, was killed on September 11 along with three other Americans when armed militants attacked the US mission in Benghazi and a nearby CIA annex in a prolonged assault.

Nine months later, despite a Libyan and FBI-led investigation, no one has been charged with the killings, and the events in Benghazi remain a political football with Republicans accusing the US administration of a cover-up.

Jones said she wanted to mark her swearing-in, which she likened to a wedding, with a bit more “hoopla” because the State Department family needed it as part of the healing process as they grieve for Stevens and his colleagues.

“It is the weddings, with their optimism and promise of new life, that get us through the moments of grief that life invariably presents,” Jones said.

“It is these rituals that remind us of what brought us to serve in the first place, the ideals we are privileged to represent, far beyond the din of Washington’s political noise.”

While Jones acknowledged it would take time for a democracy to take firm hold in Libya, she praised the Libyan people’s commitment to such ideals.

“The Libyan people endured 42 years of rule by intimidation. They courageously defeated a dictator and are now determined to experience governance by representation,” she said, vowing to stand by their side.

Jones, who is married to the current US Ambassador to Pakistan Richard Olsen, has served much of her career in embassies around the Arab world, including in Iraq, Jordan and Syria.

Jones was the right person to take on the job in a “tough part of the world at this critical moment in history,” Kerry said.

“She’s a thinker, she’s a doer, she’s a leader who thrives when charged in tumultuous situations. And I think she’s obviously somebody for whom no obstacle is too big.”