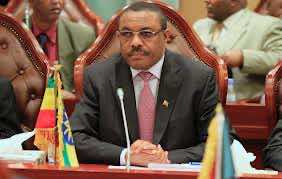 The deal replaces a colonial-era agreement that granted Egypt and Sudan the majority of water rights and allows upstream countries to implement irrigation and hydropower projects without first seeking Egypt’s approval.

Egypt and Sudan have not signed the Cooperative Framework Agreement (CFA) led by the Nile Basin Initiative, but six upstream nations have.

In addition to Ethiopia, Burundi, Kenya, Rwanda, Tanzania and Uganda have all signed, while Democratic Republic of Congo and newly independent South Sudan have said they also intend to join.

For decades, Egypt held veto rights over all upstream projects, following powers granted by a 1929 colonial-era treaty with Britain.

Ethiopia inked the deal in May 2010, and its ratification by parliament comes amid rising tensions between Addis Ababa and Cairo over Ethiopia’s construction of the Grand Renaissance Dam on the Blue Nile.

Egyptian President Mohamed Morsi has warned that “all options are open” over the construction of the dam, but Ethiopia insists it will not go to war with its neighbour, dismissing Morsi’s words as “empty and violent rhetoric.”

The Horn of Africa country has pledged to press ahead with the dam, despite Egypt’s fury.

Shimeles said the deal replaces the “unjust” agreements of 1929 and 1959 that awarded Sudan and Egypt control of the lion’s share of the river, and says the agreement ensures equitable access to Nile waters.

“Ethiopia has never considered the 1959 (and) 1929 agreements binding, as it has never been a party to it,” Shimeles.

“The CFA is a response to the unjust colonial imposition on the part of the riparian states, preventing them from exploiting equitably the Nile resources,” he added.