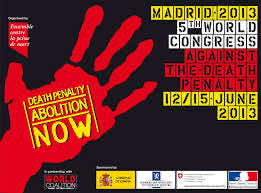 A Moroccan delegation composed of parliament members and representatives of non-governmental organizations is taking part in the 5th world congress on capital punishment taking place in Madrid this June 12-15 in the presence of over 1,500 experts from 90 countries.

In addition to MPS, the Moroccan party to the conference includes delegates from human rights advocacy associations, the Moroccan prisons observatory and the network of Moroccan MPS against capital punishment.

Two members of the Moroccan human rights organization (OMDH) were elected Wednesday at the coordination commission of the world coalition against capital punishment.

Spanish and French foreign ministers, respectively José Manuel Garcia-Margallo and Laurent Fabius, and representatives of the Norwegian and Swiss governments attended the opening session that heard a message from UN Secretary general Ban Ki-Moon.
The Fifth congress is patronized by Spain, France, Norway and Switzerland.

Today, 140 of the world’s 198 states have renounced the use of capital punishment, but a quarter still retain the death penalty. Executions continue to take place every year in around 20 states.

Anti-capital punishment persons will hold a march in Madrid on Saturday.