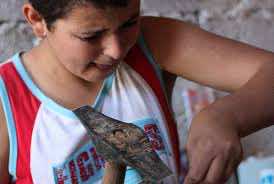 The report shed light on the “lamentable” working conditions of children in the kingdom, characterized by low wages, long working hours, physical and verbal abuse, as well as non-compliance with the Moroccan law that prohibits the employment of children under the age of 15.

In this regard, HRW noted that “working children – most of whom are girls – work more than 12 hours a day and 7 days a week for wages as low as $ 11 per month.”

545 DHs per month, which is the wage of those working young girls, is less than a quarter of the minimum monthly wage set for this sector, which is fixed at DH 2333.

“If the Labour Code sets 44 hours of work as an average for most workers, this does not cover working children,” HRW deplored.