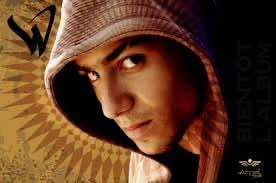 A Tunisian rapper was handed a two year prison sentence on Thursday for insulting the police in one of his songs, an AFP journalist reported.

The verdict was announced by the judge at a court in the Ben Arous suburb of Tunis where Ala Yaacoub, better known by his rap name of “Weld El 15”, was being retried after the same court convicted him in absentia in March.

As the judge read out the verdict, shouts of protest erupted in the court room from his supporters who were swiftly expelled by police, with some of them beaten outside the building.

The musician had been given a two-year jail sentence in March for posting a rap video called “The Police are Dogs” on the Internet.

His lawyer, Ghazi Mrabet, had said he was charged with conspiracy to commit violence against public officials, and insulting the police, offences punishable by up to seven years in prison.

Before the trial opened on Thursday, Yaacoub had said he was afraid and criticised the authorities for not respecting freedom of speech.

“I am afraid because in a country like Tunisia the law is not applied; you can expect anything,” he told AFP.

“In the song, I used the same terms that the police used to speak about the youth. The police have to respect citizens if they want to be respected,” Yaacoub added.

In the video the singer is heard saying: “Police, magistrates, I’m here to tell you one thing, you dogs; I’ll kill police instead of sheep; Give me a gun I’ll shoot them.”

Ahead of the original trial in March, in which four others were handed prison sentences but later released, the interior ministry said the song’s lyrics were “unethical, abusive and threatening” towards pubic officials.