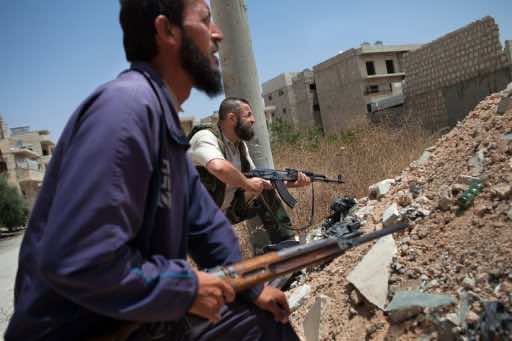 The United States dramatically toughened its stance on Syria on Thursday, accusing Bashar al-Assad of using chemical weapons against his people and promising “military support” to rebel forces.

President Barack Obama’s administration announced it had conducted a review of intelligence reports and concluded that Syrian regime forces had used banned arms, including the nerve gas sarin, in attacks that killed up to 150 people.

Officials refused to rule out moving towards arming anti-regime rebels or imposing a no-fly zone over Syria, and said it would provide backing to the Syrian Military Council (SMC), the armed wing of the opposition.

“The president has made a decision about providing more support to the opposition. That will involve providing direct support to the SMC. That includes military support,” deputy national security adviser Ben Rhodes said.

“I cannot detail for you all of the types of that support, for a variety of reasons, but again, suffice to say this is going to be different in both scope and scale in terms of what we are providing,” he said.

Hawkish US lawmakers welcomed the administration’s change in position and one, Senator John McCain, said he understood that Obama intended to go further.

“He’s reached the conclusion they used chemical weapons, and that they are going to provide arms to the rebels,” McCain said. “Since he hadn’t announced it, he may reverse that. But I’ve been told that that’s the case.”

Rhodes did not confirm this but warned Washington had toughened its stance.

“The president has said that the use of chemical weapons would change his calculus, and it has,” he said, adding that Washington has a number of “legal, financial, diplomatic, and military responses available.”

He also said Washington had passed its information on chemical weapons to Russia, which is an ally of Syria and the main obstacle on the UN Security Council to international action against Assad.

Rhodes said the increased involvement of the Lebanese militia Hezbollah and Syria’s ally Iran in the conflict had “added an element of urgency” to calls for a tougher response from the United States and its allies.

In a further sign of the United States ramping up its capabilities in the region, a defense official told AFP it will keep F-16 fighter jets and Patriot anti-missile batteries in Jordan after a joint exercise ends this month.

The military also plans to keep a unit of US Marines on amphibious ships off the coast after consultations with Jordan’s leadership, he said,

Washington has long led demands, echoed by its European and Arab allies, that Assad must step down before Syria’s factions can begin to reunite the country after more than two years of civil war that has left 90,000 dead.

But it has resisted calls to arm the rebellion against the strongman’s rule, amid fears that many of the divided rebel forces are Islamist extremists with ties to Al-Qaeda and like-minded extremist anti-Western groups.

Thursday’s announcement appeared to mark a decisive shift in tone, and came just as the rebel coalition was facing extreme pressure on the battlefield from loyalist forces backed by Iranian-backed militia fighters from Lebanon.

Fighting continued to rage in Syria on Thursday, and Damascus international airport came under rebel mortar or rocket attack.

No passengers were hurt, but one shell hit an airport warehouse and wounded a worker, state television quoted Transport Minister Mahmoud Said as saying

The airport lies southeast of Damascus, near several flashpoint areas and the heated Eastern Ghouta region, large swathes of which are in rebel hands.

With the conflict escalating, the United Nations in Geneva said at least 93,000 people, including more than 6,500 children, have been killed.

The skyrocketing number of deaths, along with documented cases of children tortured and entire families massacred, “is a terrible reminder of just how vicious this conflict has become,” UN rights chief Navi Pillay said.

Describing the killings as “senseless carnage”, Pillay said the toll in a new UN-commissioned study was “most likely a minimum casualty figure. The true number of those killed is potentially much higher.”

The number of people killed has soared over the past year, with the average monthly toll since July 2012 standing at more than 5,000, compared with 1,000 in the summer of 2011, the study said.

The figures in the study, running from the outbreak of the conflict in March 2011 to the end of April this year, compare with a UN toll of 60,000 in November and an estimate of 94,000 by a monitoring group.