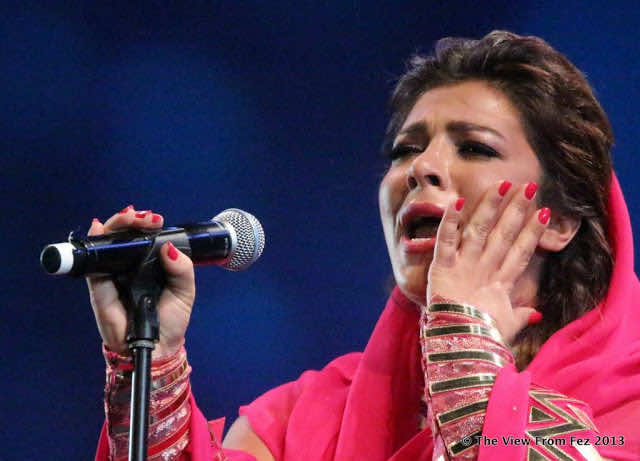 Damascus-born Assala Nasri’s first success, Ouala Tssadak, soon made her a major singer in the Arab world. Then her song Ighdab, which she sang for the great Syrian poet, Nizar Kabani, led to her being regarded as one of the great artists to sing for this poet along with such luminaries as Abdelhalim Hafez, Nadjet Saghira, Fayza Ahmed, Majida Erroumi and Kazem Essahir.

For Oum Keltoum, she sang Lissa fakir, Fina ninsa edounia and Alf lila oui lila. At that time she moved frequently between Beirut and Damascus. Later she enjoyed a scintillating success in Cairo and her name was linked to the great Arab poets and composers.

Assala Nasri’s concert was the biggest event in crowd numbers for the Fes Festival so far. According to a number of observers, the audience had grown so large that security officials stopped a large number of people entering the venue, despite the fact they had purchased tickets. The situation was described as potentially dangerous and the question has to be asked, are the people in charge of selling tickets actually aware of the capacity of the venue? Fortunately, although many people missed out, the concert went ahead without any major problems.  For The View from Fez, Natasha Christov reports.

Published in agreement with the View from Fez