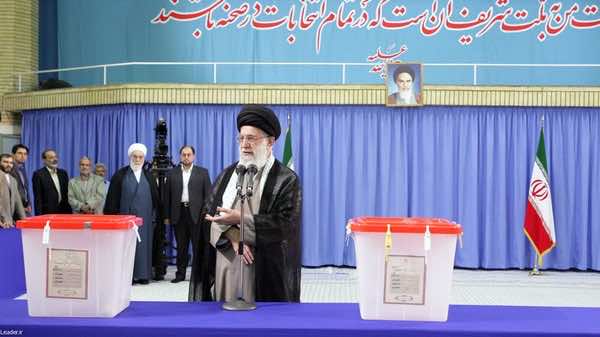 Supreme Leader Ayatollah Ali Khamenei shrugged off Western criticism over the legitimacy of the Iranian elections, in a televised speech early Friday morning as he cast his ballot in Tehran.

‘I recently heard that someone at the U.S. National Security Council said ‘we do not accept this election in Iran’. We don’t give a damn,’ he said, as quoted by Reuters.

‘Our dear nation should come (to vote) with excitement and liveliness, and know that the destiny of the country is in their hands and the happiness of the country depends on them,’ as quoted by Reuters.

“Because of the rush of voters, voting will be extended for sure,” beyond the scheduled close of 6 pm (1330 GMT), he said, quoted by Fars news agency and reported by AFP.

Iranian authorities have intensified their crackdown on journalists and political activists ahead of the June 14 elections, to avoid a scenario similar to the violence that marred the 2009 presidential poll.

Dozens of arbitrary arrests and other human rights abuses against dissidents have taken place in the run-up to Friday’s vote, Amnesty International said in a report published Wednesday.

“This latest crackdown appears intended, at least in part, to stifle debate and to deter criticism of the authorities in the lead-up to the election,” Amnesty said, adding that at least five journalists have been detained and three newspapers shut down since March.
According to Reuters there are still arguments amongst Iranians over whether to boycott the ballot.

The choice – once easy for many who turned their back in anger after years of crackdowns – has been suddenly complicated by an unexpected chance to perhaps wage a bit of payback against Iran’s rulers, Reuters reported.

“There is a lot of interesting psychology going on. What is right? Which way to go?” Salman Sheikh, director of The Brookings Doha Center in Qatar, told Reuters. “This is what it means to be a reformist in Iran these days.”